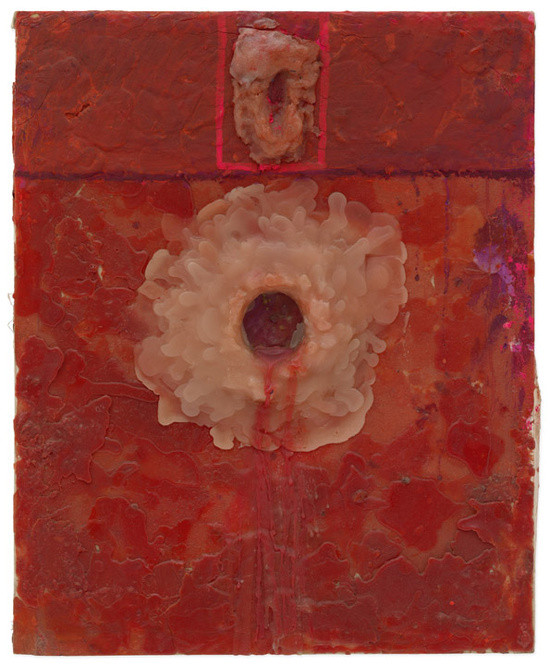 New York, NY... Beginning 9 September 2014, Hauser & Wirth is proud to present a selection of early works by Vienna Actionists Günter Brus, Otto Muehl, Hermann Nitsch, and Rudolf Schwarzkogler. ‘RITE OF PASSAGE: The Early Years of Vienna Actionism, 1960 – 1966’ is the first major New York City exhibition to explore, through rare paintings, collages, and photographs, the emergence of a critical 20th-century avant-garde movement. Curated by Hubert Klocker, the exhibition will be on view through 25 October at Hauser & Wirth’s uptown location.

As early as 1966, Vienna Actionism received critical international recognition. At the core, the movement was shaped by the need to free itself from the traditions of painting. While each Actionist found his own independent form of expression, the group’s actions became a continuation of pictorial thinking manifested in real time and space. Use of the body as both surface and site of art-making was a common point of origin for the Actionists in their earliest departures from conventional art practices in the early 1960s. The camera, too, became an essential tool for capturing these events in strictly conceived formal compositions, challenging the content of pictorial expression and foreshadowing the concept of staged photography in a larger performative paradigm, developed thereafter in 1970s conceptual and performance art.

‘RITE OF PASSAGE: The Early Years of Vienna Actionism, 1960 – 1966’ brings together a representative survey of the early and formative years of Vienna Actionism. Including a unique and rare selection of early vintage prints and original contact sheets, as well as paintings and collages, the exhibition features some of the most significant works still in private hands. The exhibition will be accompanied by a new publication including contributions from Hubert Klocker, a foremost scholar and expert on Vienna Actionism, and Gloria Sutton of Northeastern University, who examines the relationship between the Actionists and the medium of photography.

Various artistic developments in the second half of the 20th century have been influenced by a performative paradigm that emphasizes a move away from formal, static objects and toward more directly experiential, event-like, and sensorial gestures. In the early 1960s, the Vienna Actionists defined their radical style through a critique of painting, specifically that of European Art Informel and the Abstract Expressionism of the New York School. Under Austria’s Second Republic, Brus, Muehl, Nitsch, and Schwarzkogler sought out new possibilities for expression that could transcend the shadow of World War II. Motivated by material experimentation, they developed their art around radical body-centric performances through which authentic experiences of reality and incisive political statements could be directly and intensely perceived.

Working separately, the four Vienna-based artists in ‘RITE OF PASSAGE’ undertook processes in which the painted image was stretched to its breaking point. Representation in their art, especially in their actions, was replaced by a vehement devotion to sensorial and directly perceptible values: blood for Nitsch, junk and rubbish for Muehl, thick viscous white paint and meaning-laden objects for Brus, and the deconstruction of the compositionally-controlled image for Schwarzkogler.

Beginning in 1957, Hermann Nitsch began to conceive of the ‘Orgies Mysteries Theatre’, an all-encompassing synesthetic structured performance, from which his artistic practice flowed. Referencing classical theatre and indebted to the spirit of poetic drama, the work embraces principles of cults, religions, and myths. Nitsch’s paintings, likewise, are grounded in concepts of catharsis and abstraction, striving to produce rich sensory and psychological experiences through the use of a single color: red. ‘Untitled’ (1960), is one of the artist’s earliest abstract paintings and combines oil paint and wax applied in heavy textured layers. In this work, Nitsch allowed molten streaming wax to drip and congeal, creating shapes evocative of human orifices.

‘Brot und Wein (Bread and Wine)’ (1961) was originally a mural painted onto Nitsch’s mother’s kitchen wall. Upon completion, the work was removed via the Strappo technique, and transferred to canvas. The pouring, dripping, and splattering of this early work is indicative of the artist’s later Painting Actions. In ‘Kreuzwegstation (Station of the Cross)’ (1961), Nitsch translates his violently gestural technique to a larger format, introducing the analogy to dripping blood on canvas – a radical notion repeatedly found in his work. Both of these paintings bear titles drawn from religious prose and suggest sacrifice, Dionysus, and the Passion of Christ, themes Nitsch continued to explore in ritualistic performances.

In 1963, Günter Brus initiated a series of painting experiments that relied upon the body’s natural movements and sought to obliterate conventions of pictorial composition. In the basement gallery of the psychoanalyst Josef Dvorak, Brus realized ‘Untitled’ (1963) from the series Painting in a Labyrinthine Space. Brus suspended long sheets of paper from the basement’s ceiling in order to disrupt his vision of his work in totality. He then employed his body, with bound arms, as the sole instrument to dictate movement and expression, constantly reevaluating the relationship created between his body and the painted surface.

A year later, the body’s significance was radicalized in Brus’ artistic practice when it became both the material and subject of his first action ‘Ana’ (1964). The body would increasingly become the canvas of Brus’ future performances, in which he painted his own body white as if to expand the pictorial field into three-dimensional space. In his iconic action series ‘Selbstbemalung (Self Paintings)’, the body is bisected by a jagged black line and juxtaposed with aggressive and highly symbolic objects, like nails, razor blades, and knives. Culminating in ‘Wiener Spaziergang (Vienna Walk)’ (1965), Brus presented his body – the black line now symbolic of mutilation – as a living picture strolling through the city’s public space in an act for which he was arrested.

Otto Muehl pursued an aesthetic based on destruction, often employing decayed objects and rusty, dirtied materials in his art for their expressive power. He mixed white and black cements, and smeared the emulsion on to his canvases. In works such as ‘Untitled’ (1961), Muehl smashed the stretcher and slashed his picture, tying it in knots, with no regard for its material beauty. With such works as ‘Materialbild (Material Painting)’ (1961), the artist employed his entire body in such processes, stating: ‘I lay myself down and start rolling around like a hog, crawling about, scratching, mixing and splashing with my hands. I paint with my whole body, so to speak, and with all my senses.’

‘Zigarettenaschenkiste (Cigarette ash box)’ (1963), may be one of Muehl’s most radical works, and correlates to the artist’s early actions. In 1962, Muehl wrote: ‘The sense of destruction consists in destroying junk; this destruction will thereby become the midwife of a new reality’. In a wooden box, cigarette butts, ashes, matches, and hair are reminiscent of depictions of war and death. Perhaps, more explicitly, the work calls to mind the horrors of incinerated bodies, burned together in mass graves. In ‘Zigarettenaschenkiste (Cigarette ash box)’ Muehl puts forth a version of reality that has been suppressed through shame or guilt, but that must be destroyed in order to give birth to a new existence.

While Rudolf Schwarzkogler’s work shares the concerns of Nitsch, Brus and Muehl, it is distinguishable for its calculated and controlled approach. Unlike his colleagues, Schwarzkogler staged nearly all of his actions for the camera instead of a live audience. In this sense his work possesses characteristics of still tableaux, with the body and other objects arranged in precise motifs and highly suggestive situations. In a number of his drawings, the artist also designed environmental situations intended to invoke intensified perceptions of reality through sight, sound, touch, taste and temperature. With text instructions that often read like medical prescriptions, Schwarzkogler pursued themes of healing and described the mission of his work as a ‘purgatory of the senses’.

The nature and content of the four artists’ practices differ, but a set of distinct aesthetic and thematic threads connect the early actions of Brus, Muehl, Nitsch, and Schwarzkogler. ‘RITE OF PASSAGE’ invites the public to explore the trajectories of the Actionists’ work, suggesting not only a precedent to later performance art and body art, but a search for a totalizing art practice that can offer perceptual experience beyond the confines of art’s conventions.
www.hauserwirth.com