Science on the back end 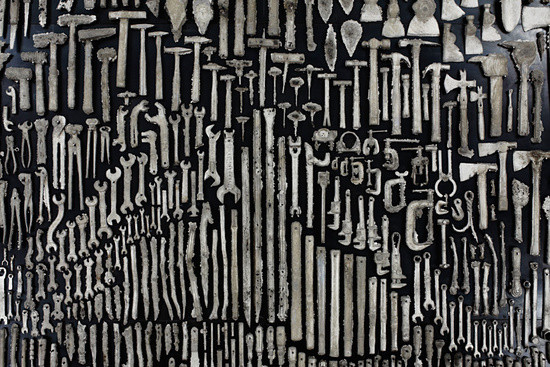 To Whom It May Concern:

I am not a curator. I merely selected the five artists for this exhibition and left to them the decision of which artworks to present. These artists inspire me. Their artistic reality is full, expansive, and not contingent on the studio environment. After all, the studio is merely a place in which to record the experience of being an artist in the world. The studio is like a church, synagogue, mosque, temple – a space where an individual performs ‘faith’ even while one strives to be ‘faithful’ everywhere, all the time, with everyone. That constant striving, or ‘faithfulness,’ is no different than being an artist...No?

Hauser & Wirth’s gallery in New York has five rooms, and each participating artist has been given a room to use as he or she wishes. I neither suggested nor requested specific works for the show. My interest lies instead in the larger creative impulse that the six of us share and the way in which each one of us processes and reorders our life experience into formal strategies, according to our personal priorities. I believe those formal strategies develop as we systematically gain knowledge through the experience of life every day, and they become a language we use to communicate with each other and the larger world.

Each of the artists here works in a way that takes into consideration death, memory, landscape, history, materiality, science, and anything else (from the exquisite whole of everything) that generates images and forms. Just as professional translators can provide many different people with the same information by translating English to German, German to Chinese, Chinese to Navajo, and Navajo to English, each artist in this exhibition deploys a different artistic language to discuss shared experiences that connect them. I suppose I, too, am a translator in this situation – someone who sees relationships between their concerns and recognizes traces of their work in his own. I mention this only to acknowledge a level of intimacy and depth of understanding of each one of these five artist’s practices. Of course I may not be right, but nonetheless intimate.

Perhaps I can illustrate what I mean with this really dumb story:

I went on a long walk to the delicatessen with my dachshund, Rainer. For every step I took, Rainer took 20, so he became very kaputt. Being the masochist that I am, I decided to share the burden and crawl alongside Rainer like a Neanderthal. Rainer thought I was being a wiener for making fun of him. So, I put him in my rucksack and waltzed home.

Native English speakers understand this story because German vocabulary has melted into our language over time and created a shared sensibility. Similarly, each of the artists in this exhibition ‘speaks a different language’ that I nevertheless understand intuitively, that reverberates in my own practice by virtue of connections that have distant but powerful origins.

During a conversation at his studio, Marc Ganzglass described an object he created to closely resemble a wheel. He said ‘It’s kinda like science on the back end.’ He was being funny but there is always a quiet insightfulness in Marc’s humor. Science is presumed to produce facts and reliable knowledge. But, paradoxically, scientific answers and explanations only serve to expose the limits of our knowledge and the vastness of the unknown. Science marks the frontier of the mysterious. In considering the form of an autonomous wheel and its relationship to the history of art and the contemporary dialogue of appropriation, Marc’s poignant humor is decidedly understated.

In this line of inquiry science is not an afterthought but an infrastructure. Being an artist today is not so different from being an archaeologist; the artist sifts through the endless array of particles in our environment, the images, forms, materials, myths, blood, and guts. Perhaps what Marc Ganzglass was talking about at his studio is the mystery that an object reveals. The object – what would commonly be referred to as a wheel – draws the viewer to meditate upon a place we have already been, highlighting the entirety of human history and evolution. It is not the duty of the wheel to give answers to all of the questions this meditation raises, but rather to inspire us to consider the meaning of this wheel.

I left Marc’s studio knowing this phrase – ‘science on the back end’ – should be the title of the show I was invited to organize at Hauser & Wirth. Marc’s statement both suggested something important about science and described something true about the process of making art; it illuminated for me the similarities between art and science. Webster’s Dictionary defines ‘science’ as the ‘systematic knowledge of the physical or material world gained through observation and experimentation.’ This is the perfect descriptor of what art is. And what is an artist if not one who is developing systematic knowledge gained through experiment and observation of the physical or material world? Well, there is more of course, there is always more.

I will mention that all wheels ask the same questions of their design in relationship to their utility and context. Common wisdom holds that it is futile and redundant to reinvent the wheel. But this is what art needs, to be destroyed and rebuilt without referring to an operating manual. There is no reinvention, only innovation. Our world has only new ideas that beg our participation. It is our involvement that creates never-ending meanings, different answers to timeless questions.

Thanks for your time,

Matthew Day Jackson
From a hotel in Frankfurt unable to sleep
April 9, 2012
www.hauserwirth.com