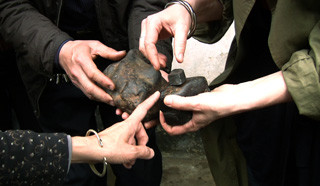 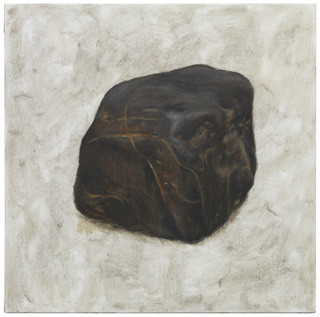 Antje Majewski: "Meteorit", 2013, oil and earth on canvas
Foto: Jens Ziehe, Berlin, courtesy of the artist and neugerriemschneider, Berlin
The artist Antje Majewski (born 1968 in Marl/Westphalia) has been dealing for some time with the origin and significance of objects which she has brought back from various journeys. Seven of them have been gathered in an imaginary museum and form the core of her so-called “Gimel World” – a world of relations, in which no thing exists independently of the next, no person independently of the world. Departing from this collection Antje Majewski now presents, for the first time in Germany, her full research into “the meteorite”.

The exhibition in the Studio is a travel report: an elementary component of Antje Majewski's research is to undertake a second journey to the places of origin of the objects brought back and to follow their stories, in order to “make them speak again”. In Heidelberg she is going to present the whole process of objectively exploring the “meteorite” – from the purchase of the object in 2005 at a flea market in Beijing, through the encounter with the meteorite researcher Lu Ling to the trip to the village of Yang Wu Sha in Southern China, which itself possesses a particularly large meteorite. The encounter with Antje Majewski was significant for the village residents: they used the artist's interest as an argument vis a vis the government, against resettlement but in favour of opening the region for tourism.

While it is on, the exhibition will be expanded by more photos and information. Antje Majewski is going to travel back to Yang Wu Sha and report on what has become of the village.

In her works, Antje Majewski pursues anthropological and philosophical questions using the resources of painting and video. She studied Art History, Modern History and Philosophy in Cologne, Florence and Berlin. She has been Professor of Painting at the Muthesius Academy of Fine Arts and Design in Kiel since 2011.