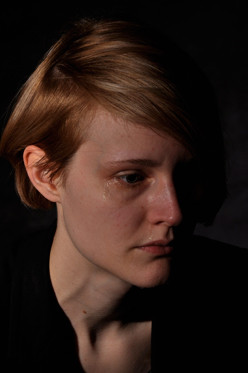 As co-editor of PROVENCE – a magazine limited to eight issues addressing the connections of the art sector with advertising, fashion and design – Daiga Grantina is interested in the strategies of adoption, the discursive relationship of image and sound as well as the infiltration of commonly used imaging methods by reverting to pre-cast pathos formulas of empathy and closeness.

Thus, the centre of her exhibition at Hermes und der Pfau lies in the portrait of a friend as crying woman, which she staged at Jet photo studio at Berlin’s Alexanderplatz – her theoretical point of origin for a possible group of works relating to this motif. It is not least the composure of light that Daiga Grantina uses to stage the fragility of the crying woman – which can be seen as both clichéd picture of femininity and reference to Bas Jan Ader – as a classical motif within the history of art.

In the exhibition, the installation “Voices” with its detached, polyester-covered surfaces is brought together with the photograph and evokes sound-absorbing walls used in recording studios and offices. The combination of the portrait of the crying woman with the sculptural elements unfolds an awareness of silence by way of a somehow filmic superposition, where the quest for emphasis can almost be experienced as physical intervention through the retention of “sound”.

Daiga Grantina was born in Riga, Latvia, in 1985. She has been studying at Hochschule für bildende Künste Hamburg (University of Fine Arts of Hamburg, Germany) since 2005 and her works were among others exhibited in her solo exhibition “Lunettes” at the Bell Street Project Space in Vienna and at the group exhibition “Richard Prince and the Revolution” (curated by Jonathan Monk) at Barcelona’s ProjecteSD (both in 2009). The issues “P” and “O” of the PROVENCE magazine – published by Grantina in cooperation with Tobias Kaspar and Hannes Loichinger” – were accompanied by thematically associated exhibitions at Café Hammer in Basel, Switzerland, and at Halle für Kunst in Luneburg, Germany (open until 06 June 2010).
www.hermesundderpfau.com