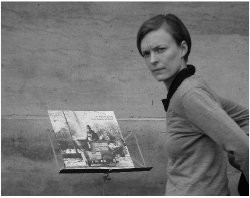 “Pretzel Logic” is the first solo exhibition of Berlin based artist Hanna Schwarz (*1975) in Stuttgart. In her exhibitions Hanna Schwarz is composing her works, which are referring to traditions of minimalism and early performance art, in scenery like arrangements. Her movies, drawings and objects have to be read like traces of an absent scenery. Her new movie “Rehearsal”, that she developed especially for “Hermes und der Pfau”, is referring to the choreographies of Yvonne Rainer. It is exploring the presentation of the female body in postmodern dance. Four dancers are being observed by the camera as they are practising different positions and tab-leaux vivants that have been chosen by the artist. The change of professionalism and relaxation, concentrated work and slapstick-like-spontaneity is blurring the transitions between acting and forgetting one self. Like Oskar Schlemmer, who positioned the dancers of his “Triadic Ballet” on geometrical pictures, Hanna Schwarz lets her dancers move on fixed lines. The gymnastic rings that the girls hold in their hands has to be understood as a reference to Schlemmers costumes as well as the exaggerated walk on the drawn line reminds of the filmed documentation of Bruce Naumans “Walking in an Exaggerated Manner around the Perimeter of a Square” of 1967/68.

Hanna Schwarz was born in Stuttgart in 1975. She studied at HfBK Hamburg from 1998 to 2005 with Stephan Dillemuth and Cosima von Bonin. Now she is living and working in Berlin. In Hamburg the artist worked in various group related coherences, among others as a member of “Akademie Isotrop”, as a co-founder of the temporary exhibition space “Die Blaue Kugel” and together with Julia Horstmann as organizers of “Salon de Thé”. Hanna Schwarz‘ work was last shown in the group shows “Grit and Vigor” (Light & Sie, Dallas), “Spiralen der Erinnerung” at Kunstverein Hamburg and “Don‘t accept mañana” at Kunstverein Braunschweig.