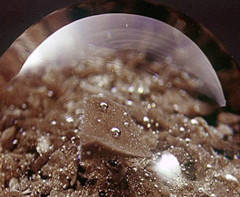 Hermes und der Pfau is pleased to announce the presentation of “Premier rêve d’Oskar Fischinger (part I + II)” by French artist Isabelle Cornaro (*1974) per invitation of Cecilia Alemani and X-Initiative at “NO SOUL FOR SALE – A Festival of Independents” in New York.

The works of Isabelle Cornaro, which have recently been shown in a solo exhibition at the Kunstverein für die Rheinlande und Westfalen in Düsseldorf, analyze the complex relationship between perspective and space, constructed image and encoded association through drawings, videos and installations.

The two 16 mm projections of “Premier rêve d’Oskar Fischinger (part I + II)” are an hommage to the German filmmaker and pioneer of abstract film Oskar Fischinger (1900 – 1967), whose experimental animations for Walt Disney have inspired Cornaro for years in her work about the fetishistic character of objects. For the presented work, Isabelle Cornaro shot various private commodities and objects associated with film, like objective lenses, from different distances and in different takes. With the adopted alteration of proportions and the particular display of the commodities within the filmed image, the viewer's perception of these objects shifts. In the first part of the film, the use of slow pans set the objects like landscapes, or in a static way like statues, while in the second part, the use of extreme close-up views soften their silhouettes into abstract shapes, reminiscent of the images of experimental film.

Isabelle Cornaro was born in Aurillac / France in 1974. She studied at École des Beaux Arts in Paris and at Royal College of Arts in London, and lives and works in Paris. Her works have recently been shown in solo exhibitions at the Kunstverein für die Rheinlande und Westfalen in Düsseldorf (2009) and La Ferme du Buisson in Noisiel (2008). The artist has participated in group exhibitions such as “Bijoux de famille” at Galerie Chantal Crousel, Paris and “Gennariello” at BaliceHertling, Paris (both 2009),“Three black Minutes” at Künstlerhaus Stuttgart (2008), “Where The Lions Are” at Sheung Wan Civic Center, Hong Kong (2008), “Spring Selection” at the Drawing Center, New York (2008) und “Twice Told Tales” at Galerie Michel Rein, Paris (2007). Isabelle Cornaro is represented by BaliceHertling, Paris.

NO SOUL FOR SALE aims to bring together the most exciting, creative and respected not-for-profit centers, alternative institutions, artists' collectives and independent enterprises from around the world that contribute to the international art scene by inventing new strategies for the distribution of information and by supporting a diverse cultural program at the building of X-Initiative in the former Dia Art Center (548 West 22nd Street, New York, NY 10011).