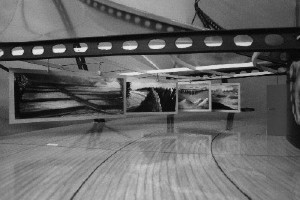 Niek Van De Steeg (*1961), based in France since 1985, was fast to define the conceptual framework for his work. His projects deal with mainly real but also fictive architectural spaces which “establish a relation between artistic, social and political categories ”.* and thereby continuously challenge the responsibilities of the artist, the group and the individual. The resulting range of documents (models, drawings on blackboards, lectures) can be compared with Joseph Beuys’ “Kapital Raum” in their monumentality and polysemy. With Table d’Hôtes, Niek van de Steeg is showing “Le Pavillon à Vent présente: L’ exposition: ‘Le Manège des Douze +’”. This project is a monumental space for a touring exhibition from the year 1991 which celebrates the European Single Market. Through the documents and the material (photo album, element from the realisation of the model as well as a video with shows the Pavillon à Vent in Bilbao in 1992) a “hyper report” is created in which political reflection and poetic intuition complement each other.

Niek Van de Steeg was born in Renkum, the Netherlands in 1961. In the course of the last 20 years the artist’s work has been exhibited in numerous solo and group shows; most recently at the Biennale de Lyon (2007) and in group exhibitions at the Grand Palais, Paris and the Centre Pompidou (both 2006). Niek van de Steeg is represented by Galerie Verney-Carron, Lyon.

Table d’Hôtes is a mobile and minimum device for the display and exhibition of art: a table and two benches. As a surface designed for reception and consultation, it regularly welcomes artist whose works takes the form of documentation, archives and publication. Table d’Hôtes is a proposition of the artists Pierre Olivier Arnaud and Stéphane Le Mercier.

Niek van de Steeg: “Le Pavillon à Vent” is a project in the frame of Semaine Française in cooperation with Art 3.