Things slowly curve out of sight until they are gone. Afterwards only the curve remains 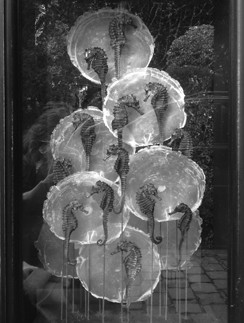 On the XL chapter of his novel Tristram Shandy, Laurence Sterne includes a set of sketches indicating the non-linear path of a well-told story ; narrative digressions appear as deviations from a straight line. Between the curve of forgotten things from Richard Brautigan’s poem and the ones from Tristram Shandy, the works gathered in this exhibition draw the curves of a story derived from a shared living whose linearity remains hypothetical.

The making of an exhibition raises the question of time. Times. Of the conjugation of different times in a space. Spaces. Physical. Conceptual. Fictional. Emotional. Fragments of spaces, which the visitor, in the best of the worlds, will take with him. Possibly.
One of these times (among the others - those of the artists, the works, the visitors) is ours, our present time - this intervening period in which we live today, every day, crossed by heterogeneous elements. By thoughts, speeches, images, objects, arrangements, decisions, propositions, regrets, affects. The list goes on, modifies and repeats itself. Word wrap.

Autumn 2010.
We live in an interval. Between letters to come, the smell of Japan (still far from Yokohama) and the Parisian rumor, works on the wall, books on the shelves of an apartment in the fourth floor, the memories of our past exhibitions.
This exhibition, which is called
Things slowly curve out of sight
Until they are gone. Afterwards
Only the curve
Remains.
formulates a simple wish, that to suggest the subjective environment in which we are today. As if we were looking at a landscape. Composed of works, objects, words, books, forming the curves of our activity. Its reasons, its intuitions, its doubts, its failures. Rehearsal. Repetition.
Elodie Royer and Yoann Gourmel are writers and curators based in Paris. They both used to work at gb agency, Paris, where among others they curated “220 days”, a long-term in progress exhibition (September 2007 – March 2008) in collaboration with four invited artists. Together, they organized the exhibitions “The Crystal Hypothesis”, Gamec, Bergamo (2010), “25 square meters per second or The spirit of the hive” at No Soul For Sale, Tate Modern (2010), “La Panique du Noyau”, ESA, Brest (2010), “Les Feuilles”, Super and Palais de Tokyo, Paris (2008), “L'anomalie d'Ararat”, IrmaVepLab, Châtillon sur Marne (2008), “... with bizarre rooms in whimsical shapes (& the library)”, gb agency, Villa Warsaw, Warsaw (2006) and “Le Spectre des Armatures”, Glassbox, Paris (2006, with Mathilde Villeneuve). Their texts are published in catalogues and magazines.

*The title is a poem by Richard Brautigan, The Curve of Forgotten Things, “Loading Mercury with a Pitchfork”, 1976
www.hermesundderpfau.com