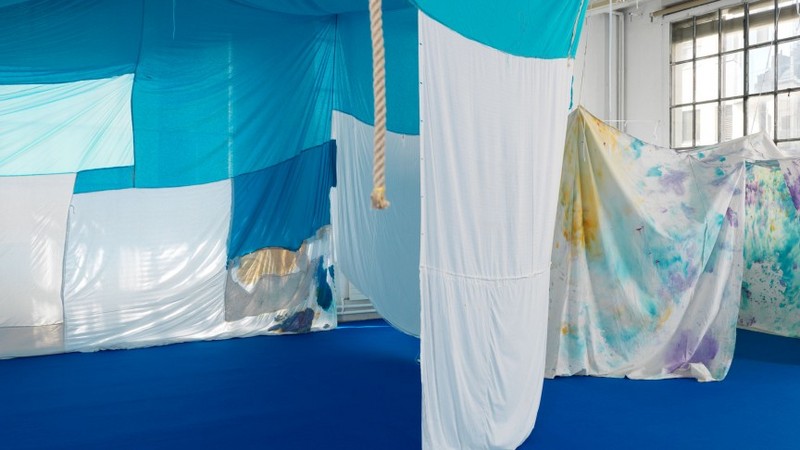 Short-termism reigns. Today’s decisions lack a future horizon. A constant flood of snapshots feeds the fear of missing out. A never ending flood of new technologies promises to solve all our problems – until the next upgrade is released. 100 Years of Now combines diagnoses of our times with scopes of action, explores the potentials of the past, and unlocks alternative futures. Until 2018, HKW will be probing the countermovement to the dictatorship of the moment. 100 Years of Now. The Opening spotlights the emergence and side-effects of normative notions of time, the planetary entanglement of technological, human, and natural forces, global political conflicts and supposed side scenes of history.

The international soloist ensemble zeitkratzer from Berlin examines war music from the euphoricized beginnings of World War I with text interventions from actor Maximilian Brauer. The avant-garde pop band F.S.K. from Munich explores the timeless dilemma of destruction and deconstruction in an homage to the Futurist Luigi Russolo, while the much vaunted young Hamburg band Trümmer tells the story of someone who went out into the world and never came back. All three concerts are commissioned works.

With presentations, demonstrations and lecture performances, October 2 will be devoted to the Technosphere, launching the four-year research project of the same name. Media theorist Mark Hansen, anthropologist Lucy A. Suchman, sociologist of finance Donald MacKenzie and historian of technology Clapperton C. Mavhunga, among others, will explore how human, planetary and technological forces create today’s global structure.

What forces shape the dominant concept of time in accelerated capitalism? How do other notions of time enable alternative courses of action? Science historian Henning Schmidgen, composer Sandeep Bhagwati, poet Guo Jinniu and media philosopher Jimena Canales, among other thinkers, will address these questions in transdisciplinary discussion settings.

Can the present be conceived of as a pre-war period? Or has The Next War already begun? Where are the new imperial rivalries and collective projections heading? Answers and further discussions will be launched by philosopher Michel Feher, psychoanalyst Laurence A. Rickels, journalist Margarita Tsomou, philosopher Marina Gržinić, artist Judith Raum and investigative journalist Pepe Escobar.

At 100 Years of Now, performative and discursive formats enter into a dialogue. In a documentary epic, the filmmaker Jihan El-Tahri tells the story of Egypt from the overthrow of King Farouk to the present day. Actors Burghart Klaußner and Ulrich Matthes read from books, letters, newspapers and magazines from World War I.

A poster series introducing 100 Years of Now with photographs by Wolfgang Tillmans will be on display throughout the city during Berlin Art Week, from mid-September onwards.

100 Years of Now is a long-term project by HKW (2015-2018), examining current social issues in the context of historical perspectives.
www.hkw.de