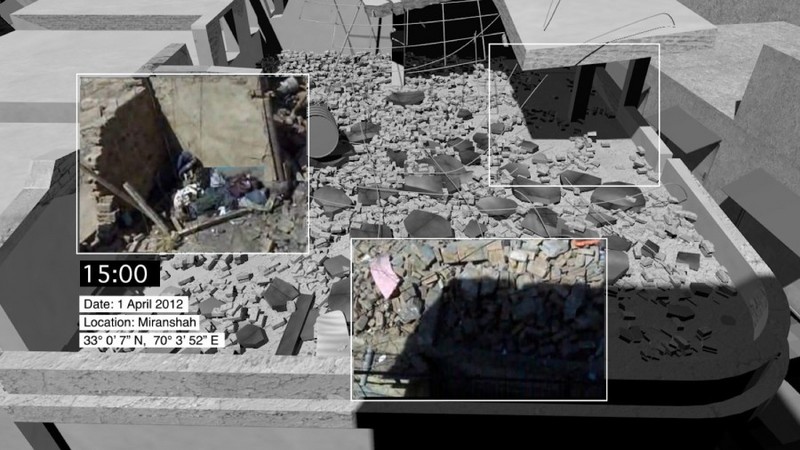 Forensis | “The Architecture of Memory.” A drone survivor building a computer model of her home to enhance her memory in Mir Ali, North Waziristan, destroyed on October 4th 2010. | © Forensic Architecture, 2013
FORENSIS
15 March - 5 May 2014

From tracing fingerprints to tracking Internet activities, forensics is central to the ways by which states police and govern their subjects.
Through its media representations it has also become a defining feature of contemporary culture. Forensis seeks to invert the direction of the forensic gaze and designate the emergence of new aesthetic-political practices by which individuals and independent organisations use new technologies aesthetic practices, and architectural methodologies to bear upon a range of issues from political struggle to violent conflict and climate change.
The exhibition presents the work of the Forensic Architecture project at Goldsmiths, University of London. It includes the presentation of of forensic investigations — involving imaging processes, satellite images, 3D visualizations, models and videos — were mobilised as evidence on behalf of prosecution teams, civil society organizations, activists, human rights groups, and the United Nations. These contemporary forensic practices are situated within broader political, historical, and aesthetic contexts.
Forensis raises fundamental questions about the conditions under which spatial and material evidence is recorded and presented, and tests the potential of new types of evidence to expand our juridical imagination, open up forums for political dispute and practice, and articulate new claims for justice.

FORENSIS is a co-production by Haus der Kulturen der Welt, funded by the Capital Cultural Fund, and by Forensic Architecture, ERC-funded research project based at Goldsmiths, University of London.
http://www.forensic-architecture.org
www.hkw.de