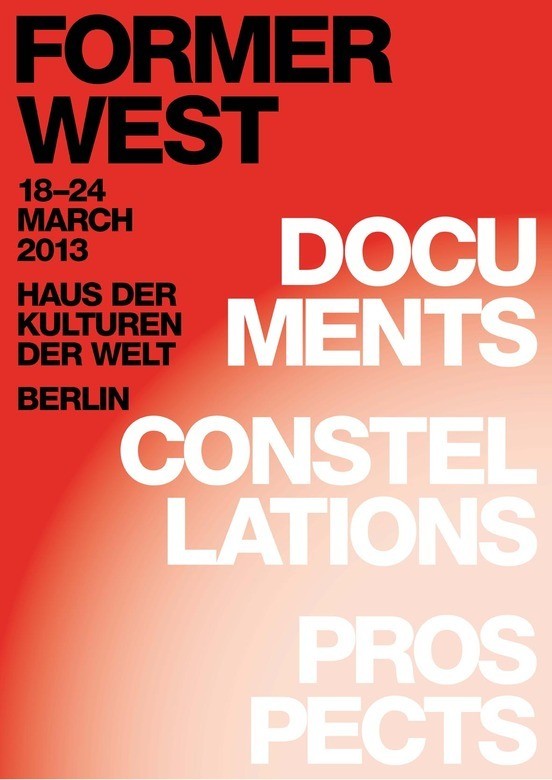 The Berlin part of the long-term research, education, exhibition, and publication project FORMER WEST (2008–2014) engages in a critical reinterpretation of post-1989, post-Cold War histories by proposing a number of tentative constellations of various documents and prospects from the fields of art and theory, uncovering the fault lines of the West’s “formerness.”

FORMER WEST: Documents, Constellations, Prospects is guided around five currents, each of which involves artists, theorists, and the public in a variety of presentations and deliberations. Art Production, conceptualized by philosopher and art critic Boris Groys, looks at artistic labor as representative of the contemporary functioning of society as a whole, raising acute questions concerning the political dimensions of art under our current condition. Infrastructure, brought together by theorist Irit Rogoff, explores how when we in the West, or in the industrialized, technologized societies, congratulate ourselves on having a well-functioning infrastructure, we forget the degree to which these have become protocols that bind and confine us in their demand to be conserved and resisted. Thus, how can we envision new paths to understanding infrastructure otherwise? Curated by poet and curator Ranjit Hoskote, Insurgent Cosmopolitanism explores how the polity—and thus the public—has been changing through recent insurgent upheavals, and proposes that we might retrieve the ideal of cosmopolitanism as an active and critical strategy from within these political hotbeds .

A week-long educational performance engages some 150 students from institutions around the world in Learning Place, conceived by writer and cultural critic Boris Buden, which engages in collective research on topics such as the commodification of knowledge, critique of creativity, and functioning of edu-industries in today’s cognitive capitalism. Dissident Knowledges, conceptualized by curators Maria Hlavajova and Kathrin Rhomberg, propose both temporal and spatial dynamic interventions in this gathering of artworks, performances, film screenings, and brief improvised statements. As part of this current, the overall project concludes with a Berlin Public Editorial Meeting hosted by curator and writer Simon Sheikh inaugurating a two-year trajectory of such meetings leading to the realization of the FORMER WEST publication.