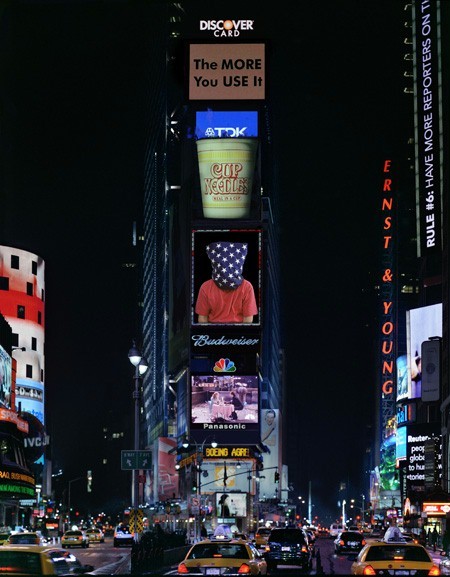 Fifty years ago the Congress Hall was built on the banks of the Spree as a gift from the United States government to West Berlin. Since the fall of the Berlin Wall, this postwar landmark of Western modern architecture has been the home of the House of World Cultures. The House is celebrating the 50-year anniversary with an interdisciplinary project on the transatlantic relationship between Germany and the USA, with a special focus on New York.

The exhibition New York - States of Mind kicks off the project on 24 August. Featuring works by pioneers like Marcel Duchamp, Hans Haacke and Gordon Matta-Clark, as well as other acclaimed artists such as Kehinde Wiley, Carolee Schneemann and Jon Kessler, it will present various forms of discourse with the public. "New York - States of Mind" illustrates the range of strategies by which visual artists and filmmakers in the USA construct and negotiate multiple allegiances and hyphenated identities. A number of works of visual art and films address the situation since 9/11 and the Iraq invasion.

New York, one of the world's music centres, is being celebrated in three concert series , respectively dedicated to Broadway, Greenwich Village and the El Barrio sound. Great American Songbook, folk and Latino legends Jimmy Scott, Richie Havens and Joe Bataan meet Tony Touch, Jeff Lewis and other representatives of the current scene. Further special events round out the bill, including the reunion of the salsa supergroup Grupo Folklórico Y Experimental Nuevayorquino.

The 50th anniversary of the Congress Hall is a fitting occasion on which to think about the future of the German-American relationship within this era's ongoing global developments. Federal Foreign Minister Frank-Walter Steinmeier will open the Transatlantic Talks , to take place from 19 to 23 September. In these one-to-one discussions, prominent personalities will reflect on political and economic issues as well as systems of rights and values in the European-American discourse.

What holds global metropolises together? From 18 to 20 October the conference New York – Berlin: Diversity, Cultures, Urban Spaces will seek to answer this question as it delves into the urban dynamic of the two cities. New York in literature , literature from New York – these intertwining strands will run through the programme. Attending protagonists of the New York literary scene will offer their insights into the diverse cultural, ethnic and social affiliations that together make up life in the metropolis on the Hudson. In The Hidden Memory - New York after 9/11 , author Luc Sante - in a discussion with Verena Lueken - will explore the geography and psyche of the city after 9/11.
During the Asia-Pacific Weeks, the creative impulses that have arisen out of Asian immigration in the city will be presented under the motto New York: usAsia .
The conference Fluxus - Networks between West and East is devoted to Fluxus, the network that in the 1960s linked artists around the globe, especially from Asia, North America and both Western and Eastern Europe.

The performance programme nomadic new york counters the cliché of Manhattan as an unsleeping, voracious demon, offering in its place a vision of a metropolis of many small interstitial spaces. This performance art rejects the spectacular and instead pours its political energy into forming temporary collectives, reappropriating urban territory and decelerating time. The New York artists will set up camp in Berlin's urban space and invite the city to conquer anew the renovated House of World Cultures. They will tell us a story of contemporary life in Western cities, one that we all have a part and a stake in; their narrative of New York will at once be an artistic remapping of Berlin.