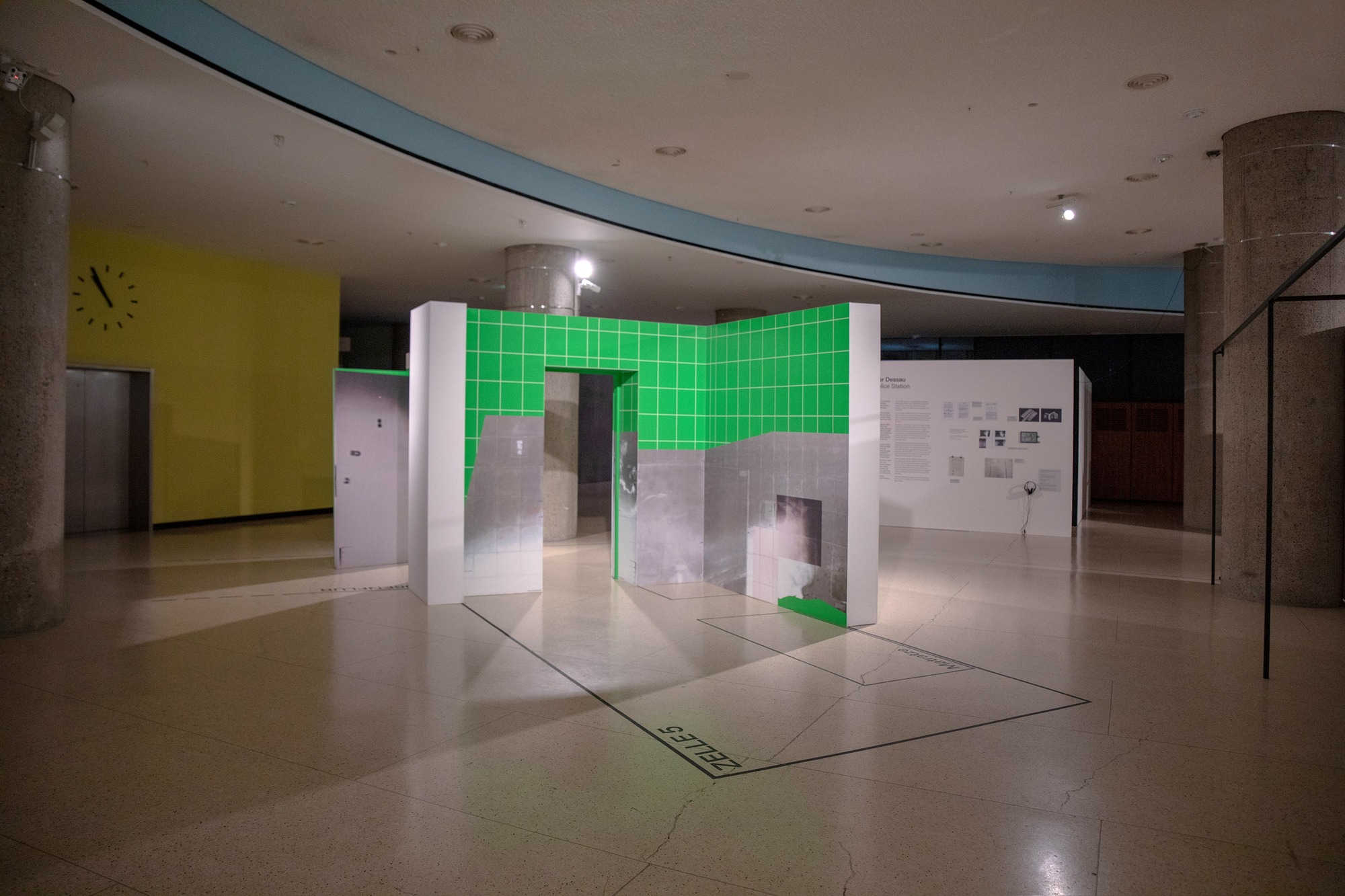 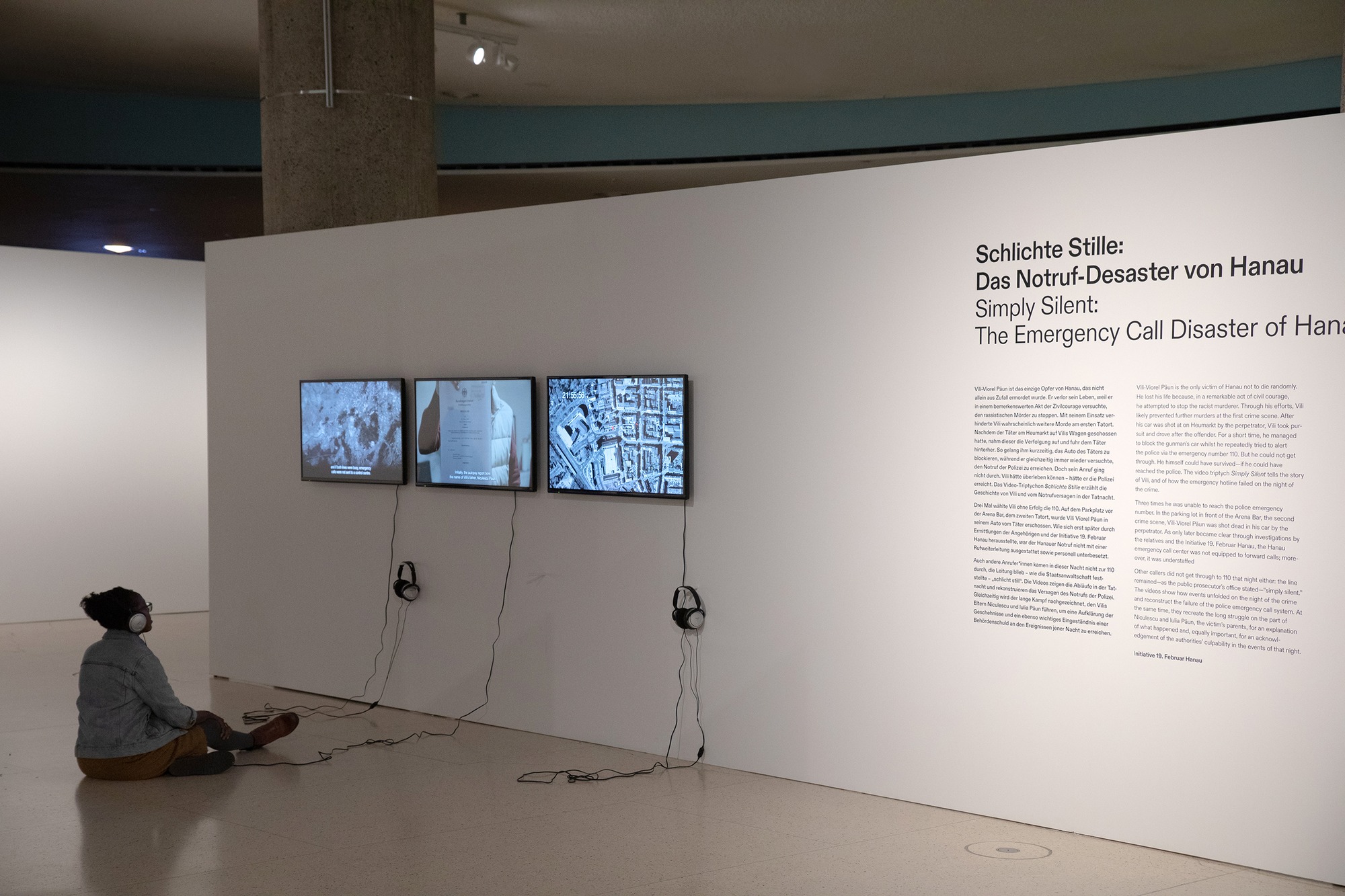 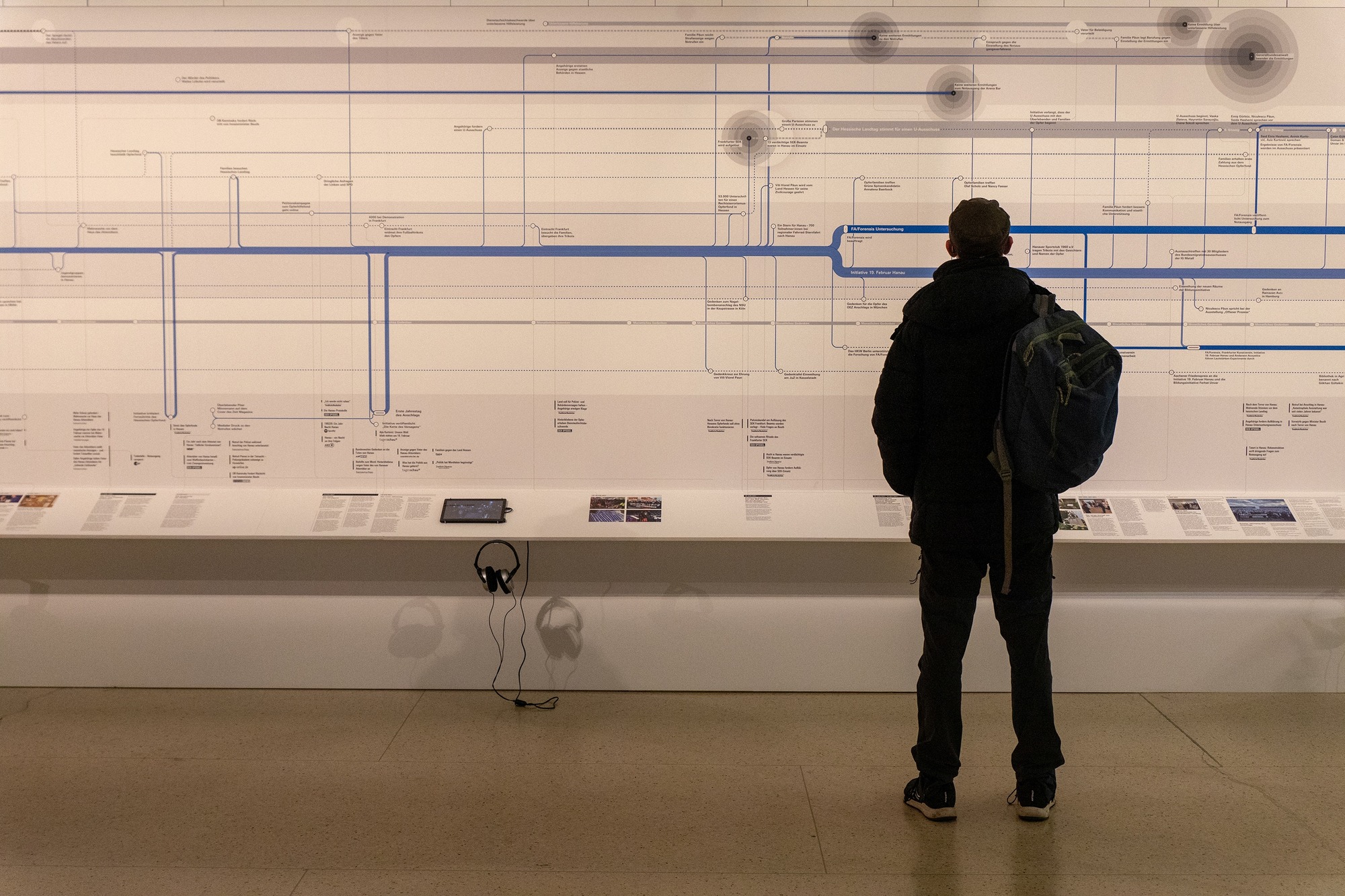 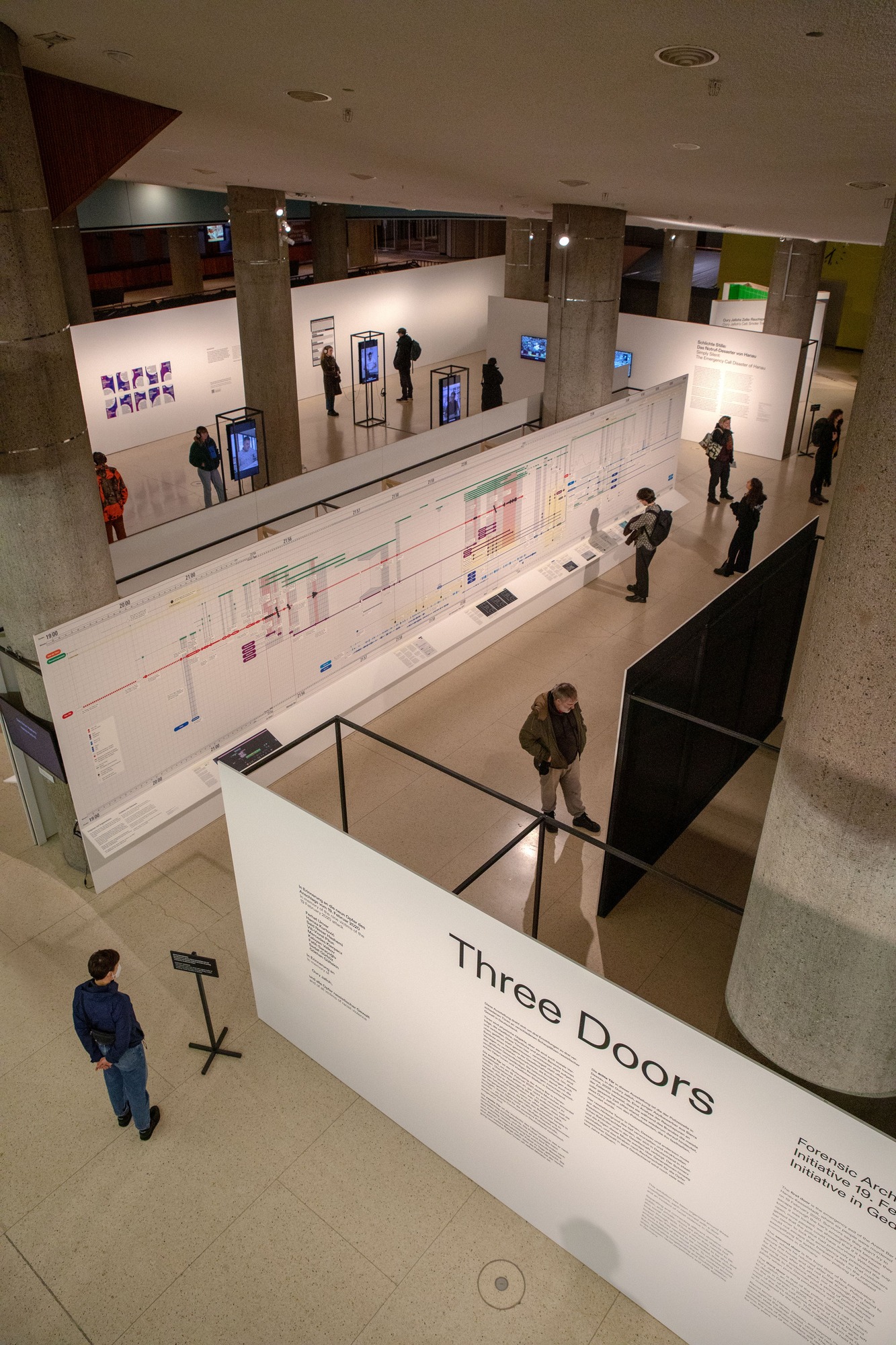 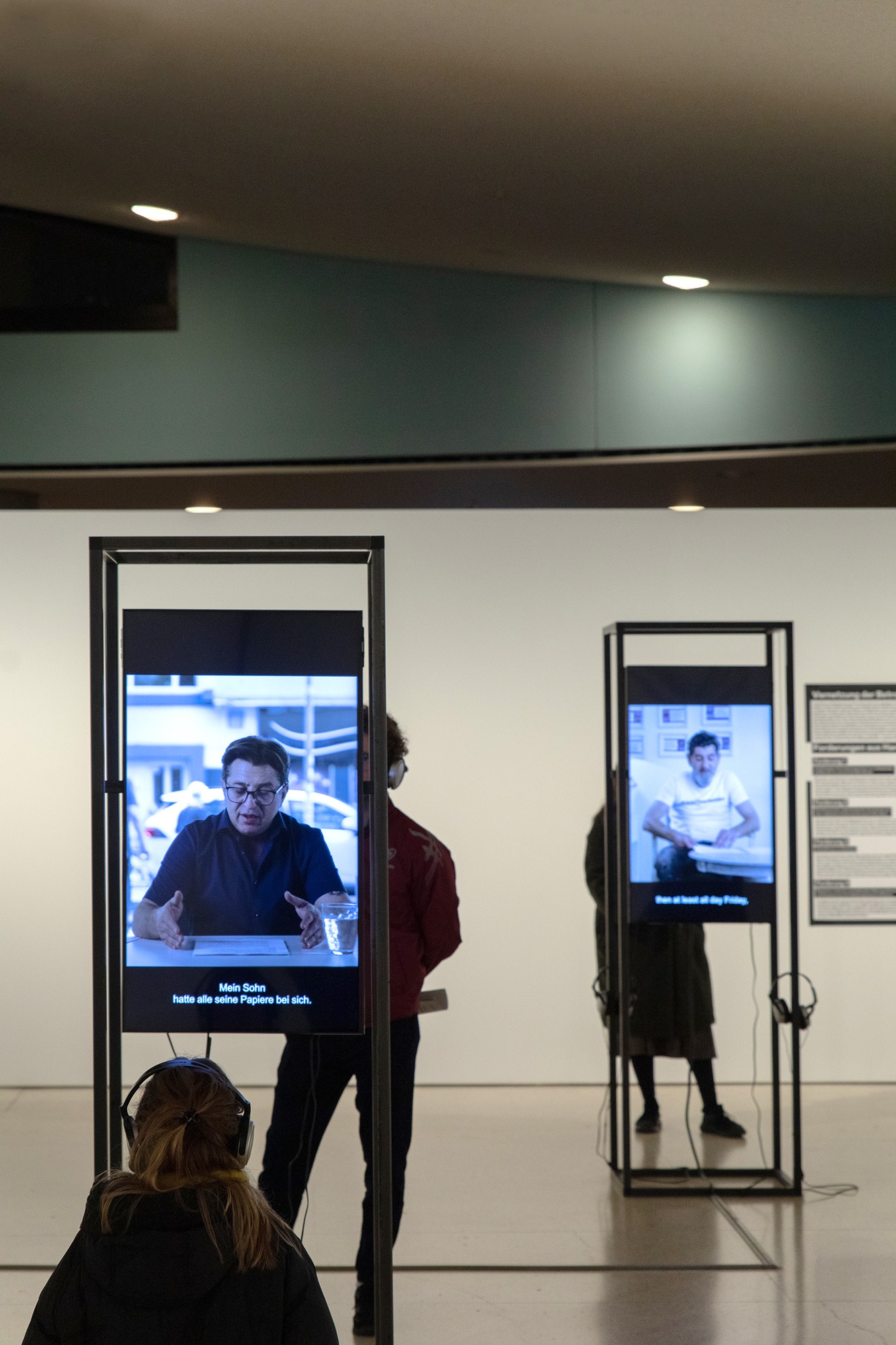 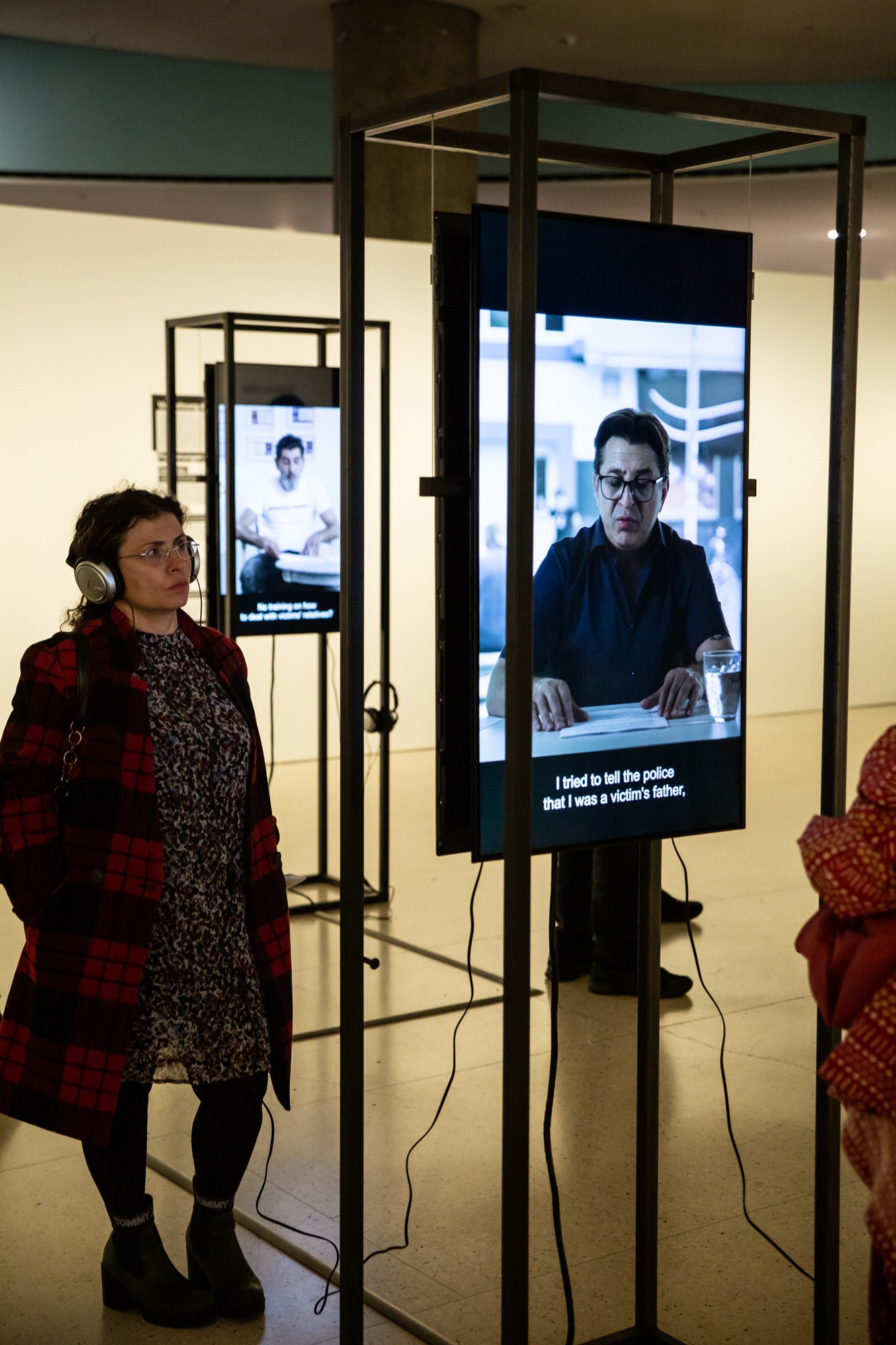 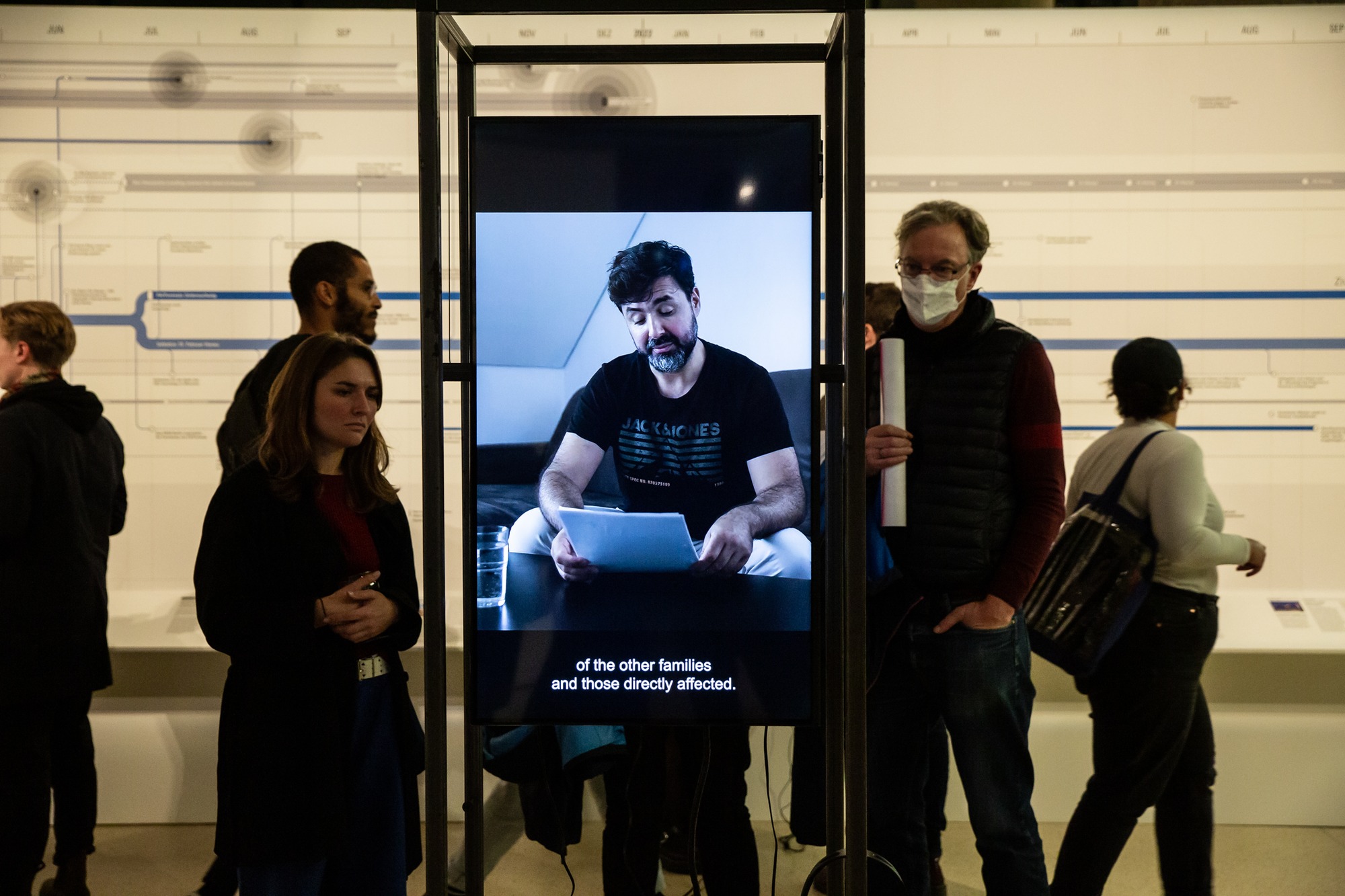 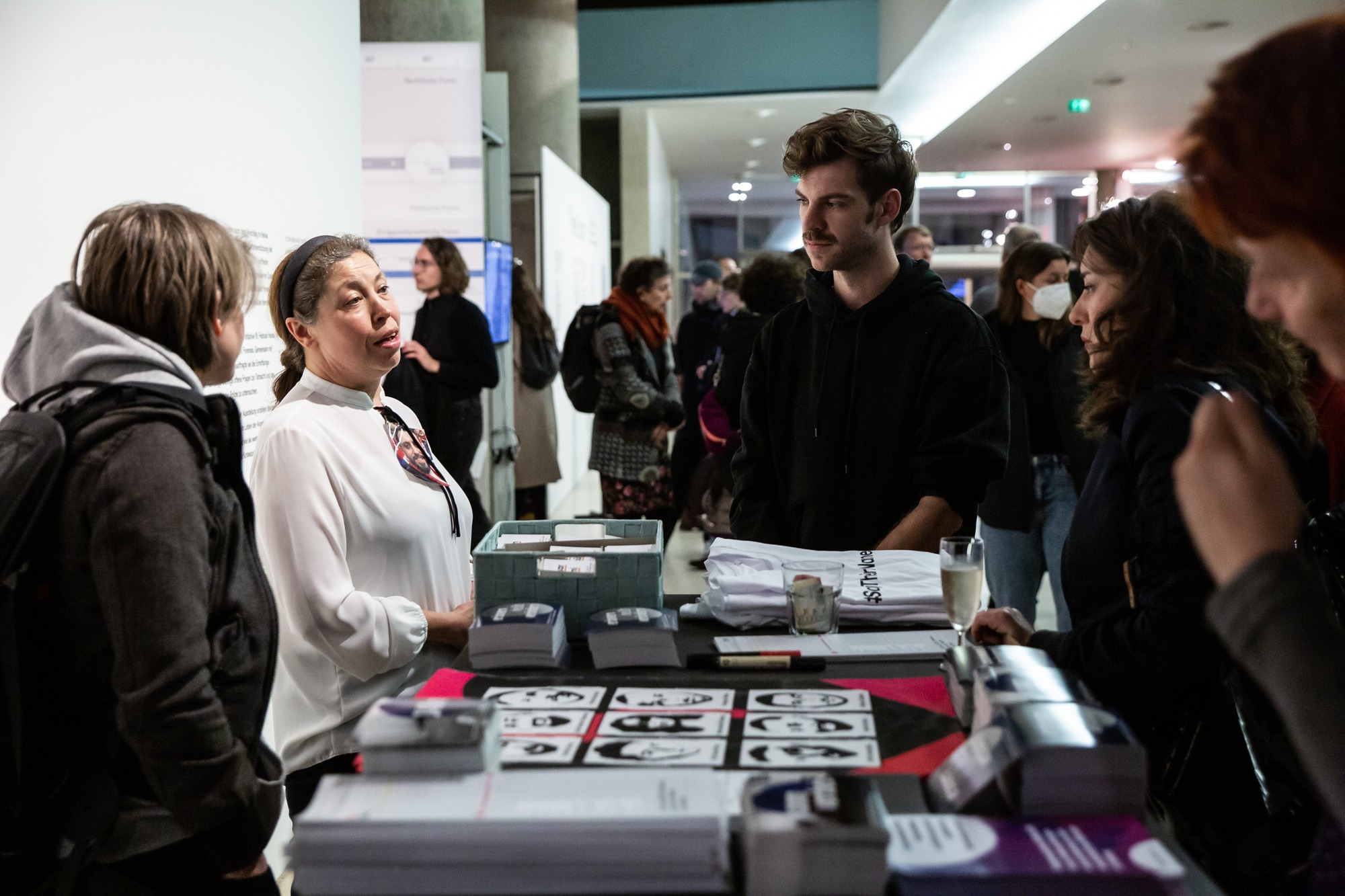 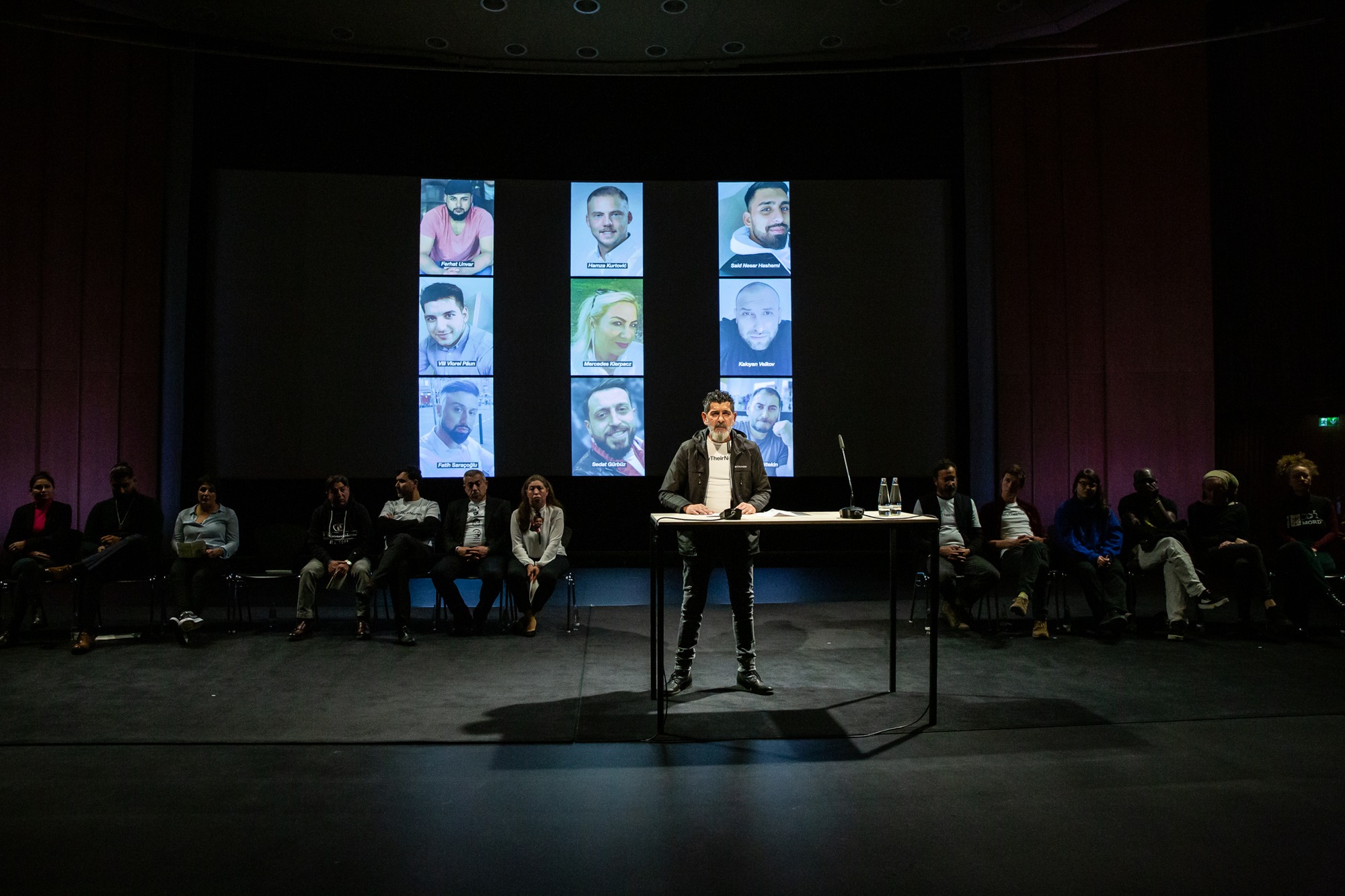 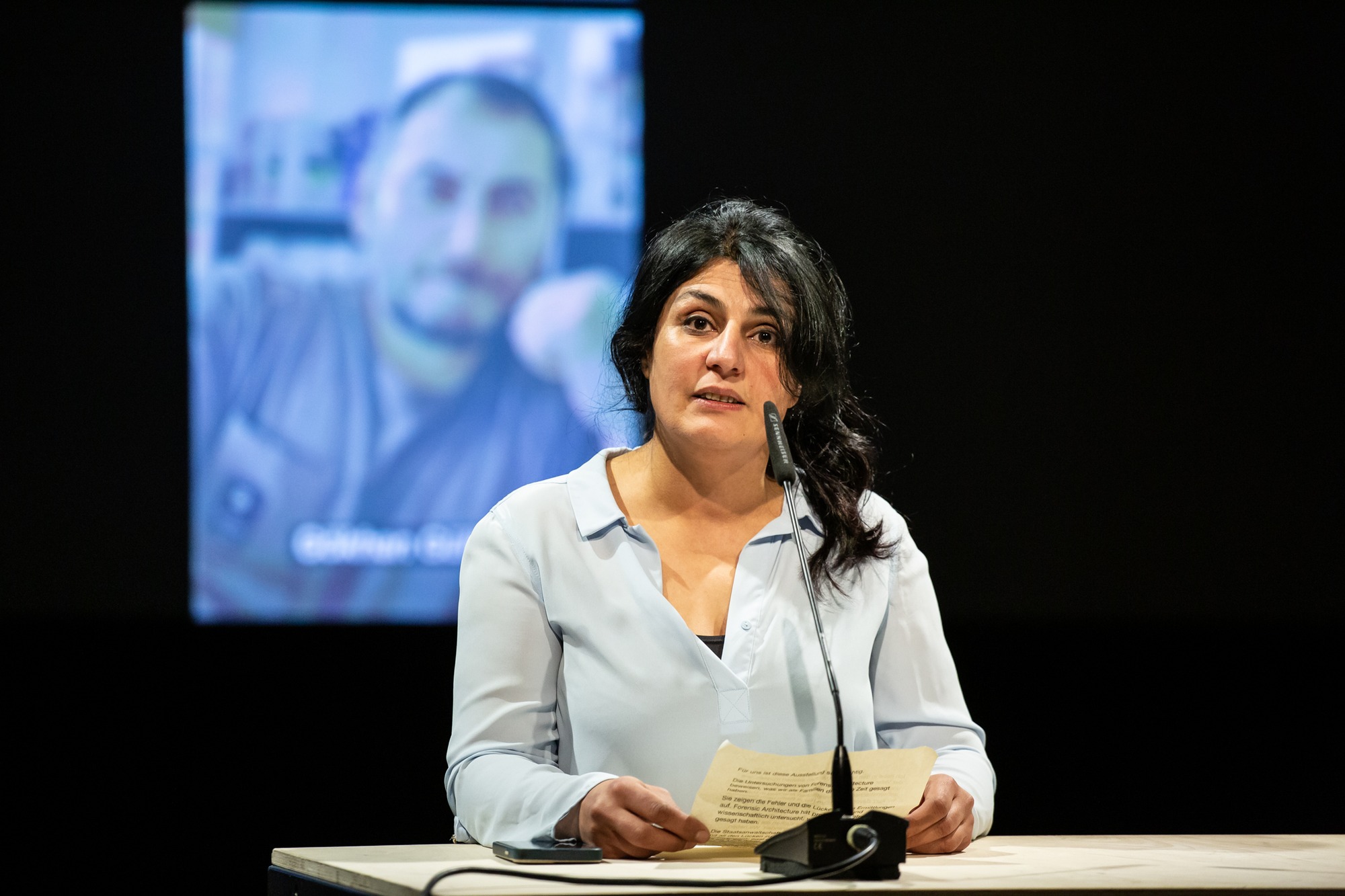 Serpil Unvar
Photo: Miguel Brusch / HKW
It is nearly three years since nine people were murdered in a racist terror attack in Hanau. It is nearly eighteen years since Oury Jalloh was burnt to death in a police cell in Dessau. The victims’ families, friends and the survivors are still struggling for accountability.

Separating and connecting different domains – state, public and private – doors are physical objects but also social contracts. The exhibition presents three investigations, each concerned with a door, unraveling different aspects of racist violence in Germany: In Hanau, it is the locked emergency exit door of the Arena Bar and the front door of the perpetrator’s house that the police have inadequately monitored. In Dessau, it is the door of the police cell in which Oury burnt to death. Closed when they needed to be broken through, open when they needed to be shut and locked when they needed to be unlocked, these doors embody a failure of the social order; to understand how, these investigations reconstruct the larger context around them, illuminating long-lasting and troubling relationships between racist perpetrators and state agencies in Germany.

Since its first presentation at the Frankfurter Kunstverein, Three Doors has directly influenced the ongoing responses to the Hanau terror attack in politics, society and the media. Now, the exhibition, along with guided tours and a public program, draws upon the experiences of relatives, survivors and supporters to give visibility to their continuing struggle – and to shed light on deeply entrenched racist structures within Germany – just a stone’s throw from the German federal parliament.

The exhibition Three Doors by Forensic Architecture/Forensis, Initiative 19. Februar Hanau and Initiative in Gedenken an Oury Jalloh was co-produced with Frankfurter Kunstverein.

Between 1904 and 1908, German imperial forces perpetrated the first genocide of the 20th century in then German South-West Africa, involving the targeted ‘extermination’ of large numbers of Ovaherero, Ovambanderu and Nama people and the killing of many others. The conference presents the initial stage of ongoing collaborative research and discusses the effects of these colonial crimes.

While the traumatic memory of the German colonial genocide and the inter-generational harm it caused is ubiquitous in Namibia, especially among the affected Ovaherero and Nama communities Germany’s colonial history and its bloody legacy is still underrepresented in contemporary German public discourse.

The conference The German Colonial Genocide in Namibia: A Case for Reparations presents the first findings of a research conducted by Forensic Architecture/Forensis, together with the Ovaherero/Ovambanderu Genocide Foundation (OGF) on sites of key importance in the German genocidal campaign around the Waterberg area. An accompanying discussion with representatives from the Ovaherero, Ovambanderu and Nama communities organized by ECCHR, explores challenges and shortcomings in addressing Germany's colonial negation and the subsequent renunciation of its duty of repair. The contributors demand reparations, restitutions and redress according to the needs of the affected people within and beyond the existing international legal frameworks.

The first phase of the research by Forensic Architecture/Forensis/OGF is presented in eight new investigative videos, which will be on display from November 4–6 in the cloakroom lobby of HKW. In these films, German archival photographs are located within constructed 3D environmental models. Intergenerational oral testimony fills the ruptures and erasures between the frames of the colonial photography, revealing multiple relations between architecture and landscapes, the displacement of Indigenous settlements and environmental transformations catalyzed by the genocide. By merging inherited forms of witnessing with cutting-edge immersive techniques of storytelling, the research team has begun to locate ancestral homesteads and burial grounds, developing unique forms of restitutive evidence.

What can civil society do when state institutions are involved in crimes? Reporters, artists, activists and others look at racist policing, border systems, cyber-surveillance, environmental crime and continuing patterns of colonial abuse exploring new investigative practices and methods to collectively establish the truth.

The defining characteristic of our era is a sustained attack by “counter-factual” neo-fascist groups against state institutions and judiciaries. A common response has been to cling to those traditional pillars of power-knowledge. But how should civil society react when those institutions themselves are responsible for crimes, state-terror and cover-ups; when the necessary struggle has two fronts: both for independent verification and against institutional knowledge?

The Investigative Commons seeks to address this crisis by socializing the development and deployment of “counter-forensic” evidence. Initiated by Forensic Architecture, FORENSIS and the European Center for Constitutional and Human Rights (ECCHR), this community of practice works to expose state and corporate violence. Its investigations combine the situated knowledge of communities at the forefront of political struggle with the toolkits of investigative reporters, whistleblowers, activists, lawyers, scientists, artists, architects and other cultural practitioners. All are working towards decisive casework that confronts urgent issues: racist policing and border regimes, cyber-surveillance, environmental destruction and dispossession, and the persistence of colonial violence. HKW follows the Investigative Commons with exhibitions, conferences and reflections on the ways in which new technologies and aesthetic sensibilities might define and transform how we investigate the world.
www.hkw.de