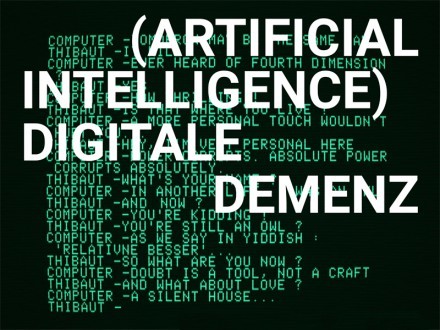 Can computers think? Do machines have intelligence, maybe even feelings? What happens when algorithms make decisions on our behalf? The exhibition “(Artificial Intelligence) Digitale Demenz” explores the relationship between contemporary art and artificial intelligence.

As early as 1996, we regarded Deep Blue, the chess-playing computer devised by IBM that won against Garry Kasparov, as a turning point in history. Humankind lost against a machine and started to ask: “When will computers take power?” As is always the case with technological evolution, we are both fascinated by and afraid of its potential at the same time. Think of HAL 9000, the computer in 2001: A Space Odyssey (1968), that decides to kill the crew of the spacecraft he controls. Communicating with computers, letting them make choices, and accepting that they have a mind, ideas, thoughts, and perhaps even feelings of their own are finally linked by a simple question: Where does science end and fiction start?
www.hmkv.de