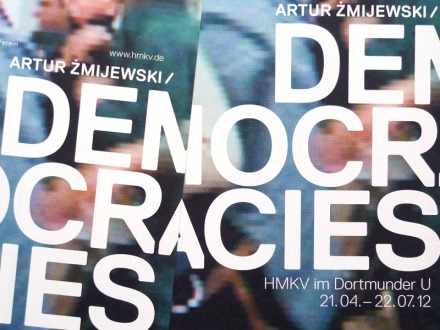 In the frame of the culture exchange programme "Klopsztanga. Polen_grenzenlos_NRW", the HMKV shows the solo exhibition Democracies by Artur Zmijewski (*1966, Warsaw). For this presentation, Artur Zmijewski will edit raw video material, creating the most extensive installation of his work which he commenced in 2009. The exhibition is on show in parallel to the 7th Berlin Biennial (duration: April 27 – July 1, 2012), curated by Artur Zmijewski.

Democracies (2009–2012) are short and precisely edited documentaries showing expressions of political will in public space. In his installation consisting of more than 20 videos, Artur Zmijewski compares different opinions and forms of enactment: Videos of demonstrations for the right to abortion or for fair wages can be seen as well as military parades, reenactments of historic battles like the Varsovian uprising of 1944, triumphant fans at the European Football Championship in Germany, Jörg Haider's funeral, political demonstrations, border controls in the territory of Gaza, etc. All videos share a documental character and make several expressions of collective will visible. Besides the images, the authentic sound of each event can be heard, blending into a noisy cacophony in the gallery space.
www.hmkv.de