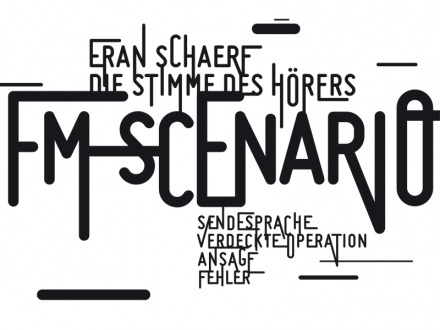 Do the media actually report on what is happening or do they invent stories about what could happen? fm-scenario stages the fictional potential of media reporting as a conference without beginning or end, a machine generating random narratives. It is based on "Die Stimme des Hörers" (The Listener’s Voice), a radio channel with a virtual DJ taking calls from the audience. The exhibition will be launched with a special programme on the Bavarian public broadcaster Bayrischer Rundfunk (Bayern2).

fm-scenario is a project by Eran Schaerf that examines the construction of mass media and the production of space in the digital era. It consists of a website (fm-scenario.net / under construction) that allows users to create new narratives with audio bits from an archive of listeners’ calls, various features and news. One such narrative provides the scenario for the artist’s work at HMKV (6th floor of the Dortmunder U), an installation that blurs the boundaries between fact and fiction, broadcaster and audience, user and author.

Eran Schaerf (b. 1962 in Israel, lives and works in Berlin) is an artist with an academic background in architecture, urban planning and photography. His work focuses on the construction of discourses at the intersection of fashion, mass media, language and built environment, intertwining historic and contemporary political narratives in various media such as print, radio and – often in collaboration with the writer and philosopher Eva Meyer – film. Schaerf’s work has been shown in exhibitions worldwide, including the 54th Venice Biennale (2011), SkulpturProjekte Münster (2007) and Manifesta 2 in Luxembourg (1998).