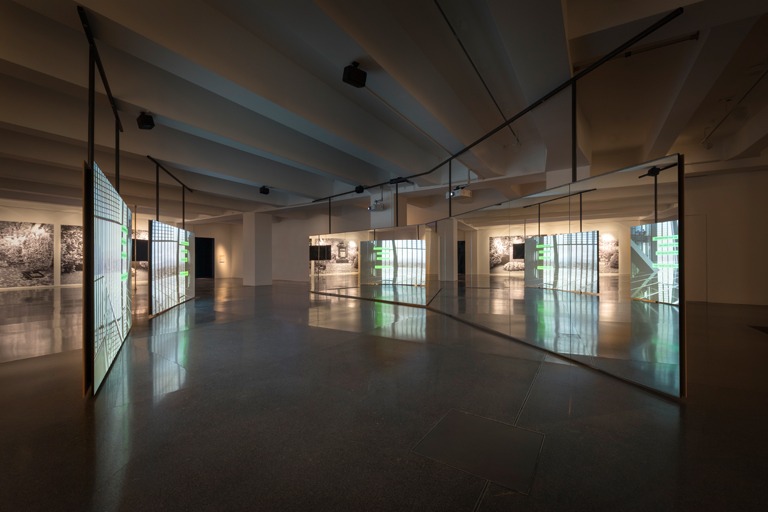 Korpys/Löffler: People, Institutions, Objects, Things, exhibition view at HMKV Dortmund, 2018. Photo: Hannes Woidich © VG Bild-Kunst Bonn, 2018
Observing the periphery of events and collecting evidence from the apparently marginal, to recognize patterns – this is the consistent working method of the internationally known media artists Andree Korpys (b. 1966) and Markus Löffler (b. 1963), who cooperate as a duo for about 25 years and are currently professors at the University of the Arts Bremen.

In their artistic-documentary projects Korpys/Löffler use the methods of the modern surveillance state not on individuals but on the state itself. They deal with the secret work and official representations of state power, as well as with their challengers in the social opposition (such as the former Rote Armee Fraktion (Red Army faction, RAF) and Blockupy or the anti-Castor movement today). "Power" can have a face in the work of Korpys/Löffler – such as the President of the USA or the Federation of German Industries, or the Pope – but more often it is examined in their institutional appearances: The artists are interested in reclusive organs such as the BKA (Federal Criminal Police Office), the BND (Federal Intelligence Service), the Federal Prosecutor's Office, the European Central Bank, the prison or the police.

With eagle eyes Korpys/Löffler observe the outer skin of such state bodies and show the mechanics of their functioning in precisely composed works of art. The artists do not engage in investigative journalism, but focus on the aesthetics of peripheral events, secondary characters and details that begin to speak by themselves: People, Institutions, Objects, Things. The red thread through their oeuvre runs along the visually stunning, but neither morally nor politically evaluative analysis of control structures and their medial precipitation.

People Institutions Objects Things is also the title of a recent video installation by Korpys/Löffler, which deals with the artistic observation of the new building for the BND (Federal Intelligence Service) in Berlin that cost € 1.1 billion to build. Starting in 2017, the most expensive building ever built by the federal government, will provide space for 4,000 agents.