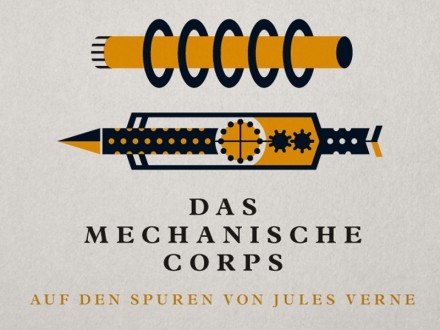 Three months, 6452 Visitors and a bunch of great events... It has been a successful exhibition for us!

For `The Mechanical Corps ́ curators Peter Lang (†) and Christoph Tannert have gathered a formidable collection of contemporary objects and artworks whose aesthetics hark back to the late nineteenth century. Their exhibition explores a phenomenon that can be observed in visual arts, fashion, design, literature, film and comics since the 1980s, namely, a growing fascination with the functionality, beauty and utopian potential of technologies developed in the heyday of industrialisation. Paradoxically, they attraction seems to grow as modern life is increasingly determined by invisible and impenetrable technology, acceleration and constant information.

`The Mechanical Corps ́ is an exhilarating hodgepodge of artefacts from the realms of contemporary art, popular culture and subculture. It assembles sophisticated mechanical devices, Victorian-inspired costumes, mind-boggling designs and crazed inventions that bring to mind the fantastical worlds of Jules Verne, while blurring the boundaries between art, handicraft and DIY as well as the distinction between experts and nerds.

The exhibition was first shown at Künstlerhaus Bethanien in Berlin and will be staged in Dortmund in memoriam of Peter Lang, who sadly passed away last year.