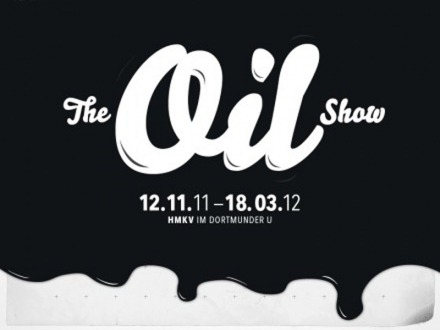 We have reached Peak Oil – the maximum capacity of global crude oil extraction and production. After Peak Oil, the total global oil production cannot be increased. In the future, demand will always exceed supply. The global struggle for resources will intensify. Despite this our dependency on oil is growing further. We cannot, or do not seem to want to do without oil. We are seriously dependent.

The works in the exhibition deal with our dependency on oil and the economic, political, and social entanglements and consequences of this growing dependency.

The works in the exhibition tell stories about globalization happening along the pipeline connecting the Caspian Sea to the Black Sea (Ursula Biemann). They take us to the Niger Delta, one of the 'hearts of darkness' where since almost forty years a "rampant fight for oil" (DIE ZEIT) is taking place (Mark Boulos, George Osodi), to the burning oil fields of Kuwait (Werner Herzog), to the Japanese island of Hashima, the Egyptian oasis Al Qasr and into the Texan Electra (Carl Michael von Hausswolff & Thomas Nordanstad). They comment upon the building of the Gazprom Tower in St. Petersburg (Chto Delat) and analyse the economic structures of "The World" in Dubai (Christian von Borries). And, finally, they drill for oil themselves, in Dortmund, and transform the Dortmunder U, the former Union Brewery, into a gigantic oil refinery (UBERMORGEN). Buy U-OIL now! You will need it.