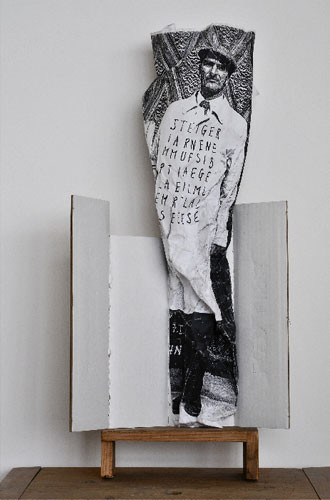 In its exhibition Kosmöschen Steiger Galerie Hohenlohe presents works and groups of works chosen from the entire body of creations of Dominik Steiger, and gives an overview of his various artistic approaches.
The exhibition includes examples of the inexhaustible variety of works from the artist's Viennese studio: Early works such as the Knöcheltyp - drawings from the 1970s - are juxtaposed with wood sculptures from the years 1989 - 1991, painted bottles meet acrylic pictures that combine words and writing in a painterly way. Furthermore the group of works Kulturcollagen can be seen - collages pasted on postcards - as well as cardboard sculptures, films and installations, that were created between the 1960s and the present.
Dominik Steiner is one of the outstanding representatives of Avant-garde literature and art after 1945. Being associated with the Wiener Gruppe (Vienna Group) and the artists of the Wiener Aktionismus (Viennese Actionism), and with his works transcending the boundaries of the arts, Steiger has created a 'little' variant of Avant-garde art in the best sense of the word. In the process of his collaborative works with Christian Ludwig Attersee, Günter Brus, Hermann Nitsch, Dieter Roth and Gerhard Rühm, Steiger positions himself as a 'parodistic troublemaker and mocking caricaturist', making a nonsense of the serious professionality of his collgegues by playing the laid-back role of the amateur - up to this day.

Symposium Kosmöschen Steiger
April 11 & 12, 2008, from 10.30 AM
The symposium held on occasion of the exhibition will pay tribute to Steiger's literary-artistic work. The aim is to position Steiger's work in the context of the Avant-gardes after 1945. In order to also highlight the contemporary aspects of Steiger's artistic and literary work, authors have been invited to read from their works throughout the time of the exhibition, in addition to the symposium lecturers who are all outstanding representatives of their respective fields.
Dominik Steiger was born in 1940 in Vienna where he is living as a poet, graphic artist, painter and sculptor.