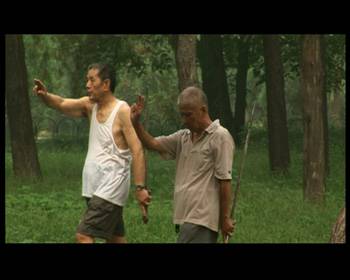 The films and videos of Imogen Stidworthy deal with the visual-spatial and acoustic dimensions of language. What is language, what do we do with language, what does language do with us or between us? Who or what is even speaking? These are some of the central questions that the artist presents in her work. To a certain extent, Stidworthy follows the impact of language: the flow of language through the body, through private and public spaces, the communication between people and the things that surround them. When looking at with Stidworthy’s work it becomes clear that language occupies a visual space. Language is part of space and its amplification; speaking is like rolling out a carpet.

The video To shows space being occupied by language. The work shows two people on two screens, a father and daughter sitting in the same room. The father, naked, sits on a stool and speaks to an imaginary audience. The daughter sits at a desk on a folding chair and pensively types. The man adamantly begins to declaim his story. The woman turns to her typewriter and begins to write. Loud, quick clatter, as sharp and precise as a machine gun. What is the young woman typing here? The story of her father? Or her own, to contrast with that of her father? The work doesn’t answer these questions, but it does show the clash of two dialogues, two texts, two generations, the two sexes. Stidworthy describes the structure of To as being “based on the idea that the presence of two people in the same room can lead to confusion – physical as well as psychological – between their two spaces. The aim is to become aware of these dynamics.”

The following works of Stidworthy can be seen in this show: 7 am (2005), Substitutes (2002) and To (1996). In 2004 the Liverpool artist won the Becks Futures Award, London. She has taken part in many international exhibitions. Most recently her films and videos were shown at the Shanghai Biennale 2006, and in 2005, at the group show Be What You Want but Stay Where You Are in Witte de With, Rotterdam. The artist has been invited to participate in the Kassel documenta 12 in 2007.