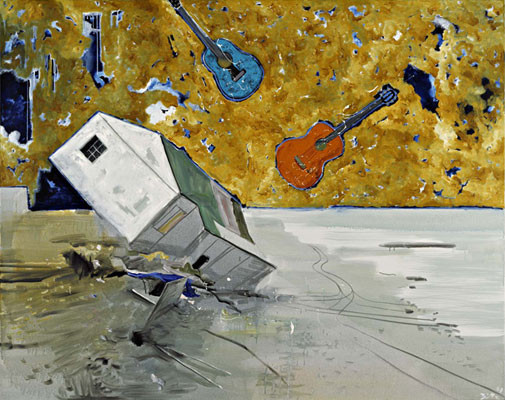 The work of the Hamburg artist Werner Büttner is being presented by Gallery Hohenlohe for the first time. By dragging deeper layers of meaning out of daily scenes that at first glance seem banal, Büttner’s large-scale paintings and enlarged colour print collages point out social ills with biting humour.
Werner Büttner was born in Jena/Thüringen in 1954 and began his artistic activities in the early 80s as one of the "Jungen Wilden", a group that included Martin Kippenberger, Albert Oehlen and his brother Markus Oehlen. In contrast to highly minimal concept and video art, they produced expressive figurative paintings that were described as "politically motivated realism". Büttner's work has continued to be stamped with irony and critical distance, its import often amplified by his combining words and images.
In 1960, Büttner's family fled from the GDR to West Germany. He comments: "Someone who has tasted two political systems as I have has the advantage of being able to look at both systems with a certain amount of scepticism" (in: Werner Büttner, Köln 2003, p.36). In his use of collage, this sceptical perspective becomes a method. The combinations of everyday and commonplace things reveal, respectively, their true colours. With cutting wit, the spell of daily social events is broken and their values become relative.
Werner Büttner works in Hamburg as a painter, graphic artist, installation artist, photographer, poet, sculptor and song writer, and since 1989 has taught at the University of Fine Arts, Hamburg.
www.galeriehohenlohe.at