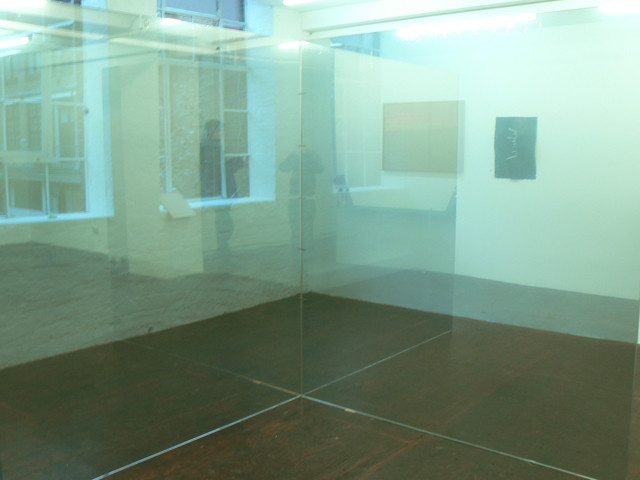 Using philosophy as his starting point, Benoît Maire employs different mediums and processes to draw on propositions found within the discipline. Through essays, performances, sculptures, paintings, videos or installations, Maire sets out his approach, using visual methods to narrate his field of investigation. The Repetition can be seen as an unfinished space, comprised of traces and indexes, written and visual, which tries to pin down the relationship between repetition and lived time. The Repetition consists of several works including the following:
L’objet de Singe is inspired by the fact that if one puts two lambs in a pen they will not be afraid, but if we were to leave one lamb alone it would become scared and bleat.
In The Man who does not Grow Old Benoît Maire interviews Romanian philosopher Ciprian Mihali. They discuss the case of Doctor Frankenstein who born into an already fully-grown body, exists without any personal history, past and memory.
Le Matin is a dog that literally cries rain. The work references Diogenes of Sinope (a contemporary of Socrates and Plato), and his canine behavior. Diogenes believed that human beings live artificially and hypocritically and would do well to study dogs. According to Diogenes dogs live in the present and have no use for the pretensions of abstract philosophy. Diogenes cried rainwater in order to try and establish a relationship with the sky. An Idea for a Film is a photomontage that shows a man throwing himself towards a door inscribed with the word “Present” on it - communicating a fear of not being able to either inhabit the present nor to be excluded from it.
Benoît Maire lives and works in Paris. Forthcoming exhibitions include: Proposition de Colloque, Kadist Foundation, Paris (April 2007); There have to be many..., Kunstverein Braunschweig (April 2007);On fait le mur (...), Espace de l’art concret, Mouans Sartoux (June 2007); Interrupting Jacques Lacan, (performance), CapcMuseum, Bordeaux (May 2007); Lyon Biennale, (Sept 2007); Forthcoming publication: What is Consciousness? Edited by Vanessa Desclaux, published by Revolver. This publication is part of the project Strategic Questions curated by Gavin Wade. Previous exhibitions include: Re-trait, Foundation Ricard, Paris (2007); Meeting Sébastien Planchard, Dolores, Ellen de Bruijne Projects, Amsterdam, Fiction, la box, Bourges (2006); The Library, Villa Warsaw, Warsaw (2006); AWOL, Biennial of young artists, Bucharest (2006); Notre Histoire, La Cabane, Palais de Tokyo, Paris (2006); Le Présent, with Etienne Chambaud, Galerie Cortex Athlético, Bordeaux (2006); Residency at Palais de Tokyo, Paris, 2005 - 2006 part of the program Pavillon. Previous interventions and conferences: Aesthetics of the Conference of Aesthetics (distributed text), LSE, London, (2006);New Chaotic Idealism: A Conference for a Dead Man, Nash Room, ICA, London (2006).
www.hollybushgardens.co.uk