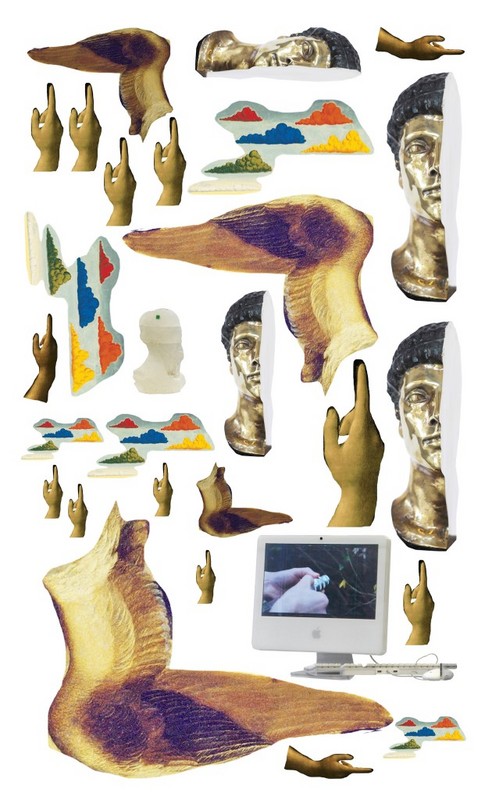 In the early 1500s, the German painter, engraver and theorist Albrecht Dürer was working on how to depict reality through figuration. His tool – that which became known as Dürer’s table, together with perspective as the rational instrument, enabled him to represent the figure ‘naturally’. Whilst Dürer’s table refers to a specific moment in art history, the idea of the tool that enabled him to measure and depict the world around him holds significance for Benoît Maire, whose practice involves an ongoing enquiry into the transferability of concept into form, and image to thought.

Benoît Maire’s practice expresses a curiosity about the status of art – a reflection and a comment on what it means to be an artist and what art can be produced from our situation of being in the world today. There is a self-reflexivity present where the artist speaks and the work echoes its own self-awareness. Beings here speaks of a plane where a flow of images appear, severed from their context and subsequently situated outside of any hierarchy. But they can still be read. Maire’s prism is conceptual art and the use of philosophy as material, so what is at stake here concerns concepts rather than a concrete reality – in this world the weapon/tool is a difficult one to define, but its use is to measure, to compare and to create meaning.

Certain words such as ‘escape’, ‘this’ and ‘those’ hold particular interest for Maire. Showing demonstrative pronouns such as ‘this’ and ‘those’ is like holding up an image of an object. Each act involves a process of alienation by separating something out from its context. Stickers have been placed behind patterned glass – square patterns that hint at the Dürer table. Instead of depicting the world with the use of the grid, fragmented images have been placed behind the grid to produce ideas. Maire’s images are to be read and his words seen as he aims to give the image the power of the concept and the concept the power of the image. Amongst the stickers we find the wing of the angel of the annunciation (by Leonardo Da Vinci), the finger of John the Baptist (by Leonardo Da Vinci), and clouds (painted by Man Ray). Perhaps Maire’s stickers and texts can be seen as idioms – as a manifestation of the peculiar, a form of expression through which you can see a word and figure concepts. For instance: having a nose stands for having a certain intuition, a common element between art and philosophy.

The stickers and text are presented in a sculptural environment created by cutting into the gallery walls. Part of the walls are removed and placed on top of another brick wall. The hole is filled with layers of patterned sheets of glass with stickers in-between. Some text is added in handwriting. A wall is a separation between two spaces, inside and outside. To cut into the wall suggests a play with the outside’s will of becoming part of the inside, and the inside’s desire of including the outside. There is also a reflection on what it means to inhabit a boundary, and what happens when we place meaning in a marginal location.