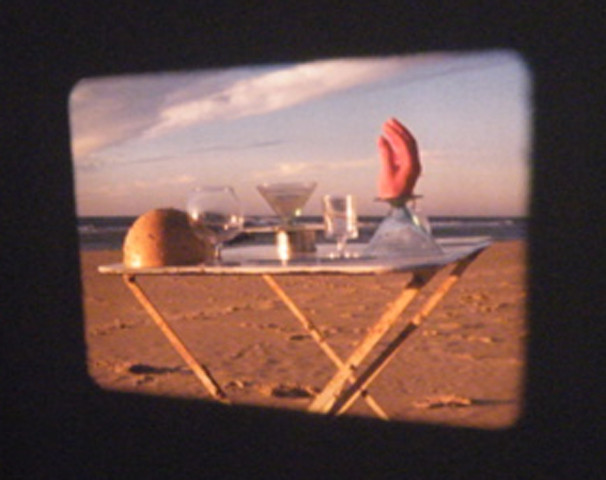 Falke Pisano and Benoît Maire begun collaborating in 2006. Concerned with the mechanics of film making
The Wave, a 16 mm film, (colour, 13.57 min, 2009) can be seen as part of an ongoing conversation between the artists - that considers the space between sculpture and the language of film. The Wave is constructed in three parts - the movement of a ‘wave’ alluding to three distinct voices, moving into and across each other, producing gaps and inconsistencies that disrupt language in a very open narrative.
The first chapter constructs and investigates a relationship between an object and a gaze, between an object and a subject. An object is described as round, but with edges, it is smooth and abstract. What happens to this object in relation to a subject, what is it without the gaze of a subject? Can we imagine an object without the subject? What is an object if it is not for me?
In the following scene we are on a sandy beech, it is windy and the sea is rough, big waves repeatedly and rhythmically make their way toward the shore. A branch has been stuck in the sand, crossed by another, creating an improvised assemblage that marks out a situation, producing a ‘place’. Within this context there is a table and a chair. On the table are a number of objects; different glasses, casts of hands in a variety of colors, a clock. A man and a woman interact with these things, as one moves them around the other observes - gently alluding to the instability of meaning. The scene is silent although the protagonists speak, as there is no sound, nor subtitles.
There is a clear shift again as the viewer is transposed to a park – from ‘nature’ to ‘culture’. The camera finds a public sculpture, a big concrete shaped shelter. People are sitting inside it. Like the assemblage of branches on the beach this sculpture - frames, communicates, sets up a location that directs people to behave in a certain way.
Benoît Maire lives and works in Paris. Falke Pisano lives and works in Berlin. Recent exhibitions include:
Benoît Maire & Falke Pisano For the blind man in the dark room looking for the black cat that isn’t there, Contemporary Art Museum St. Louis, USA, Sept 2009 – travelling exhibition (ICA, London in Dec., MOCAD Detroit in Jan. 2010, De Appel, Amsterdam in Feb 2010, Culturgest, Lisbon in May 2010), Organon and The Wave, Graz Kunstverein, Austria, 2009
Benoît Maire: Art Basel Statements, 2010, Lisson Presents 6,curated by Ryan Gander, Lisson Gallery, London, 2009, Un Nouveau Festival, (cur. Bernard Blistène), Centre Pompidou, Paris, 2009, Le jardin aux chemins qui bifurquent (cur. Lorenzo Benedetti), Kunsthalle, Mulhouse, 2009, Liquid Times (cur. Katja Schroeder), Westfälischer Kunstverein, Munster, 2009, What if this was a piece of art?, Halle für Kunst, Lüneburg, 2009, La géométrie (toucher Cordélia),(solo) module, Palais de Tokyo, Paris, 2008.
Falke Pisano: MMK Zollamt, Frankfurt, 2010, , Throwing Three Balls in the Air to Get a Straight Line, Curated by Dorothea Jendricke, Malmö Konsthall / C-Sal, 2010, In the Event of Suspicion, Bielefelder Kunstverein, 2010 , Modernologies, MACBA, Barcelona(Museum of Modern Art, Warsaw, Feb 2010, The Conspiracy, Kunsthalle Bern, 2009, Making Worlds, 53rd International Art Exhibition La Biennale di Venezia
www.hollybushgardens.co.uk