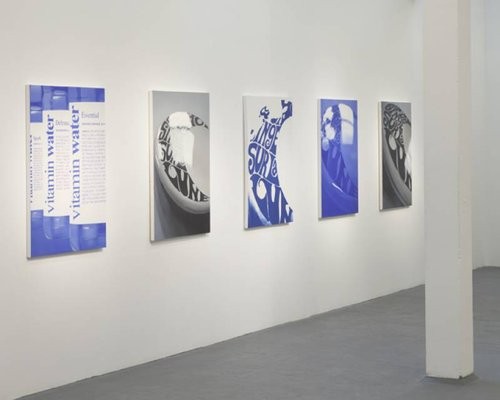 Alan Michael on photorealism: ‘It’s European and it’s American. I like it best for it’s alienating qualities - as a format, it turns off a lot of people immediately which is something I think is great. Now I’m using it to make work about reference material...I became more and more interested in looking at the process of representing reference material itself. It’s a difficult thing to talk about but I got very interested in the attitudes designers (in fashion, in architecture etc.) have towards reference material. I identified a more informal, less conscious relationship to quotation within this field and experimented with adopting more casual attitudes toward appropriation and in approaching source material – it’s about getting together formulas for generating artwork’
Alan Michael interview with Brad Phillips

In making the works for this exhibition, the artist used various methods of creative conception – adopting attitudes towards generating ideas and making formal decisions: paintings of badges made by
the artist as a project for a fanzine; colour schemes that mimic decisions by the gallery’s graphic designer in producing the preview image for the artist’s previous show at HOTEL; a large painting based on a motif of plants that characterised the artist in the mind of a friend. Other works using different techniques demonstrate reworked developments of previous paintings using imagery from ad campaigns – coincidental look-alikes to earlier works also featuring repeated texts and images, here with alternative fonts.

The work as a whole focuses on dilemmas of circulating reference material and the problems of presenting research as content for discussion. Ideally, the dilemma would be resolved when the discussion of the reference points becomes irrelevant and the communicative values of the body of work are cancelled. The artist identifies photorealism as a ‘negative format’, an area of negative energy well suited for the projection of ideas.
www.generalhotel.org