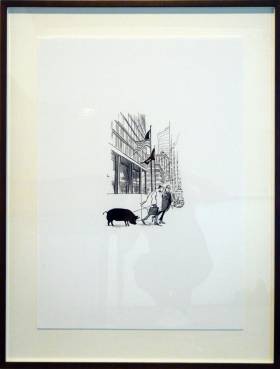 Glasp/Saxon: The Pig, 2008
Marker pen and ink on board, 74.5 x 57 cm
Alan Michael and Stephen Sutcliffe
Ritual in The Dark

In this collaboration between Alan Michael and Stephen Sutcliffe, characters from Colin Wilson’s novel ‘Ritual In The Dark’ are ‘cast’ from a combination of found and new photographs which are altered to suit. Paintings and drawings announce the title of the exhibition and illustrate works of art from the novel.

Ritual in the Dark is the story of Gerald Sorme’s friendship with - and growing suspicion of – the privileged Austin Nunne. Sorme, Wilson’s self portrait, embodies his fixation with the figure of the ‘Outsider’ (as explored in his 1956 book of the same name). The relationship between these characters represents Wilson’s dialectic of the “visionary gleam” and social morality.

The exhibition represents an exchange of material between friends, focussing on an early work of a young writer celebrated by the Sunday papers before a perceived ‘decline’ into irrelevance via occultism, murder studies, anti-post structuralism and advocacy of ‘Faculty X’.

Stephen Sutcliffe, born 1968, Harrogate, England, lives and works in Glasgow. He studied at the Duncan of Jordanstone College of Art, and Glasgow School of Art. Recent exhibitions include a solo exhibition at Micky Schubert, Berlin, and inclusion in Nought to Sixty, ICA, London, Lightbox Art Now, Tate Britain, London and Zenomap, Scottish participation at the Venice Biennale, 2003.
www.generalhotel.org