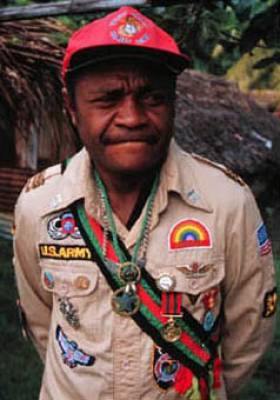 During the 1940s a cargo cult based in Sulphur Bay, on the island of Tanna in the South Pacific, came to the attention of the British Colonial authorities. Followers apparently believed that African American G.I’s arriving on the neighbouring island of Santo (laden with tinned food, red cross medical supplies and generators) were returning ancestors there to liberate them from white colonial officials and Presbyterian missionaries. Self proclaimed prophets began celebrating the immanent arrival of a messiah called John Frum. Islanders responded by ignoring the Sabbath, removing price labels from goods at the village trading post, throwing their money into the sea, slaughtering livestock and consuming large quantities of intoxicating kava tea in a bacchanalian revolt.
The cult survives today celebrating an annual John Frum Day by parading in improvised US military uniforms and venerating the Red Cross emblem, the insignia of the US Marines, the State Flag of Georgia and the Stars and Stripes. Frum is thought by some to be an amalgam of Uncle Tom and Father Christmas - an abbreviation of ‘John frum America’ (sic). Far from being simply a naïve sect the Frumists are celebrated for their role in the independence movement and for reinventing (rather than simply reinstating) ancient indigenous belief systems that had been eroded by European occupation.
The works in this exhibition make no direct reference to John Frum but variously explore themes of transference, improvisation, collective iconographies, myth and transcendence.
Phillip Lai (b. Kuala Lumpur 1969) works in a wide variety of media to track the individual within the collective. In his sculptural work the borders between the 'found' and the fabricated are often indistinct. Concerned with formal and ritualistic processes Lai's works appear to have been improvised for some specific use or purpose. Such abstractions of the prosaic explore what he terms 'over-determinations in culture' or their 'echoes' . Phillip Lai presents new works for this exhibition.
Mike Nelson (b.Loughborough 1967) recently wrote of his practice: ‘What I am interested in is the transference of meaning of an object, image or tableau by means of manipulation and displacement. A sort of schizoid shift between its original function, meaning or life, and its new totemic status.’ Nelson presents a work comprising of three components first exhibited in Cologne in 1995. ‘In the Shadow of Scartoris’ consists of three improvised means of escape. The work’s title references the Icelandic volcano of Jules Verne’s ‘Journey to the Centre of the Earth’. Nelson’s narrative instead imagines ‘three culturally disparate characters... in search of the labyrinthine chambers that lead them to their goal ... only find a concrete cul-de-sac... On realising the physical futility of their quest they convert their makeshift equipment into vessels for intoxication; a Turkish water pipe, a post industrial (acid) trap, and a Siberian still with which to pursue a more inward, mental journey of a hallucinatory nature, rather than return to the reality they had left behind.'
Paul Thek (Brooklyn 1933, d. New York 1988) aspired to make work that transcended art’s traditional place to be ‘Something else: thicker, deeper...’ Thek has had a very significant influence on artistic practice, particularly over the past twenty years. Working as a tutor at Cooper Union in New York in 1978, he instructed his students to, amongst other things: ‘Illustrate the Godhead. Add a station to the cross. Design an abstract monument to Uncle Tom’. There is perhaps something of Thek’s instruction within the works in this exhibition. The etchings presented at Hotel were created by Thek in Paris in the winter of 1975 but were not editioned until 1992, after his death from AIDS. The plates were produced whilst he had been working on ‘The Personal Effects of the Pied Piper’ and the first version of ‘Uncle Tom’s Cabin with Tower of Babel’. Later that year the etchings formed the basis of series of stage set designs for Robert Wilson. Iconography used in some of Thek’s best known works appear in these prints including the Tar Baby, the Tower of Babel and Beau Jangles (sic).
Text by Rob Tufnell
Rob Tufnell is the Curator of Turner Contemporary in Margate. He has previously worked at Modern Art, Kettle's Yard, Dundee Contemporary Arts and the Modern Institute. He also works as a writer contributing to exhibition catalogues and magazines. Recent exhibition projects include Mike Nelson's 'Spanning Fort Road and Mansion Street - between a formula and a code' in Margate and Jeremy Deller and Alan Kane's 'Steam Powered Computer with Internet Access' that will tour east Kent over the summer.