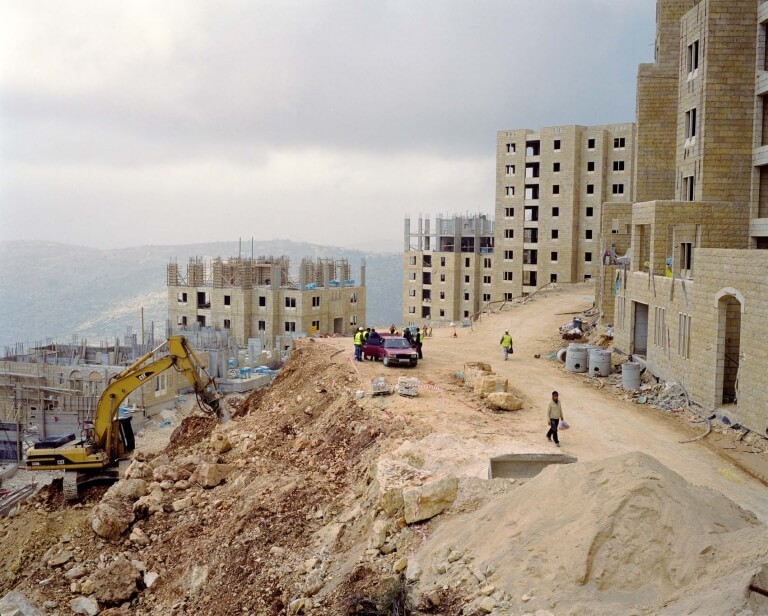 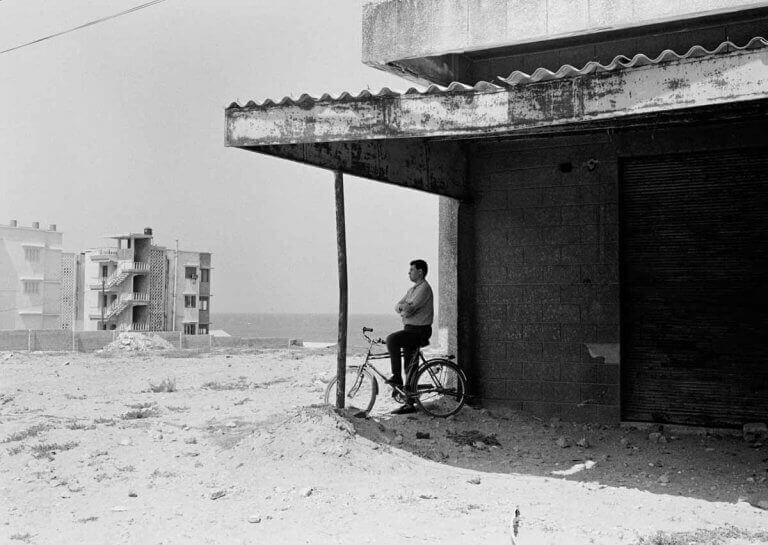 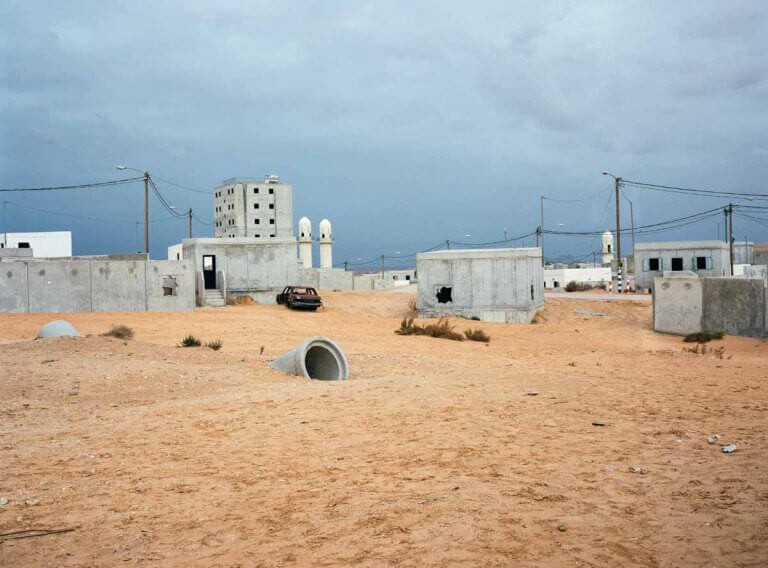 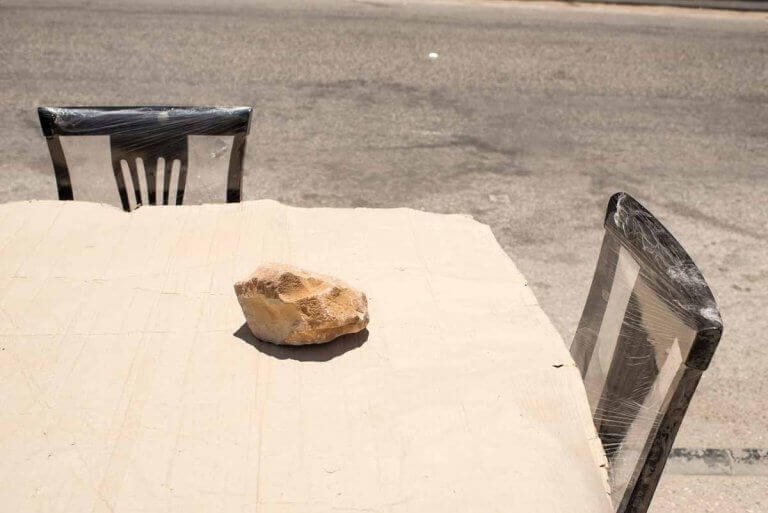 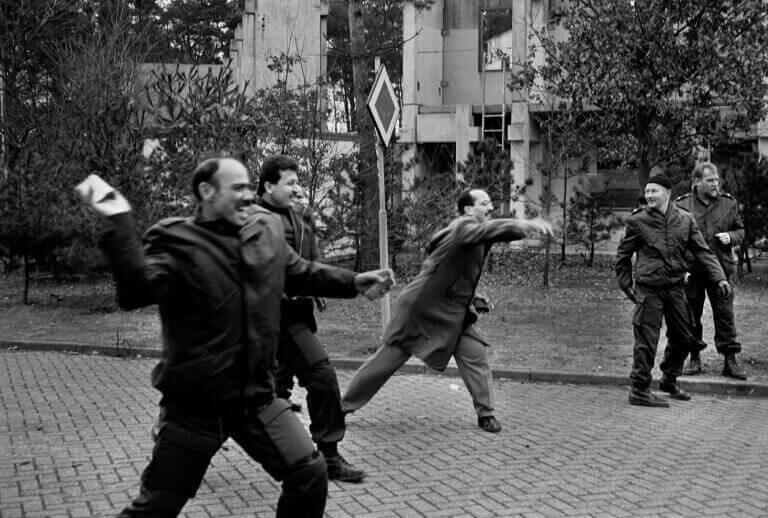 Palestinian police officers train in the exercise village from the Police Institute for Public Order and Safety in Hoogerheide, NL, 1996 © Ad van Denderen 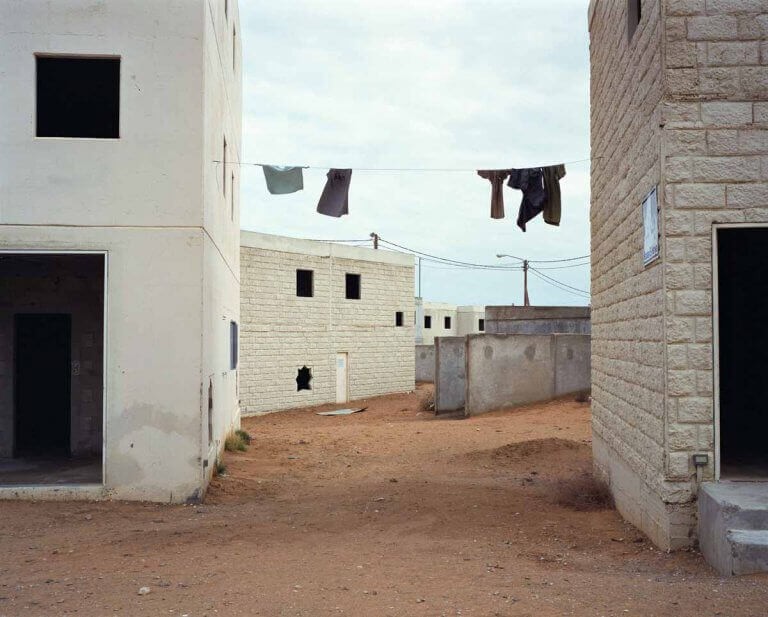 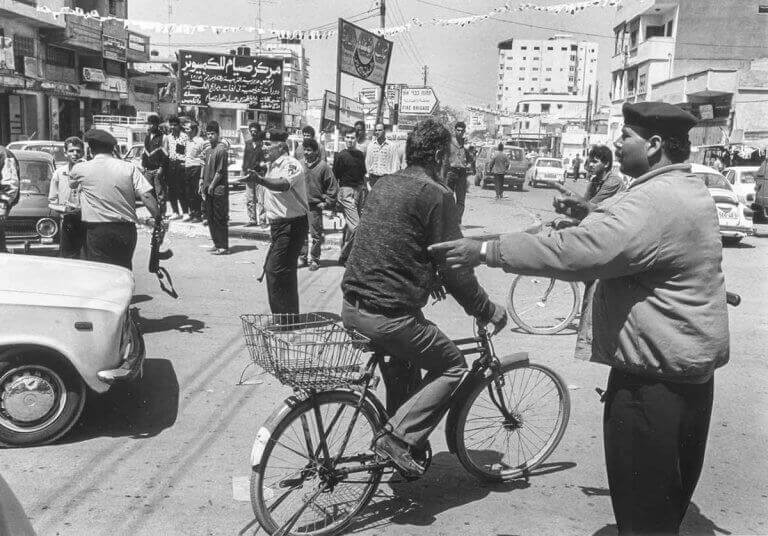 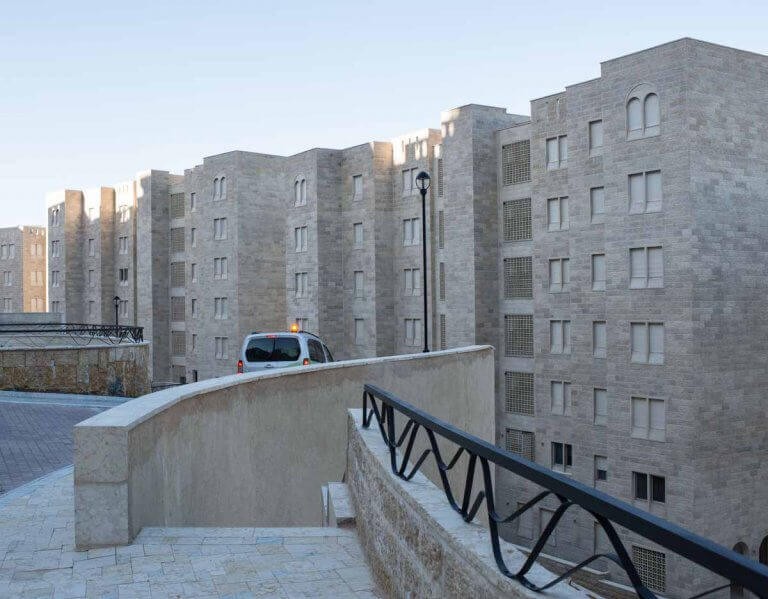 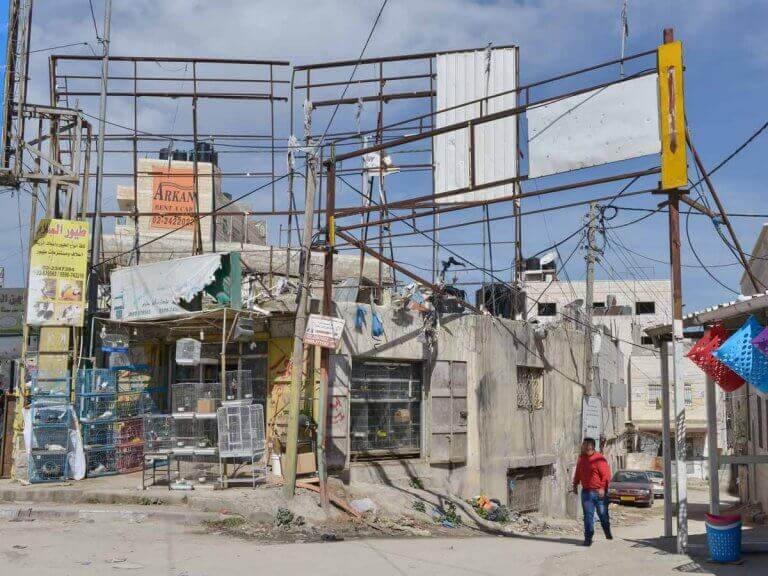 For almost 25 years Ad van Denderen, the éminence grise of Dutch documentary photography, has been photographing daily life in Israel and the Palestinian territories. He originally worked in black and white, in a classical, direct, reportage style. About 15 years ago he switched to colour, and since then he has employed a more detached and monumental photographic style. The exhibition Jerusalem Stone unites these two approaches to create a subtle depiction of the complex and precarious situation in this part of the world, and makes much use of stone as a metaphor. It is stone that principally defines the landscape, and with it the area’s water management and vegetation. Its quarries provide the material for houses being built on both sides of the border. Stones are used to throw up barriers and throw at adversaries. At one and the same time, stone is a weapon, an obstacle, and a bulwark.

Peace in the Holy Land
Twenty years ago Ad van Denderen’s photobook Peace in the Holy Land was published. It was the culmination of a project that had begun in 1993, when he had an opportunity to spend a year photographing in Israel and the Palestinian territories. The situation proved difficult to visualize, and one year turned into four. Van Denderen observed that all the parties in the conflict had some valid arguments, and this made the choice of standpoint a precarious business. Van Denderen had first visited Israel in 1966, spending six months in a small agricultural co-op, a flourishing community in which Jews and Arabs worked the land together. The future was regarded with optimism, but the ensuing Six-Day War (5–10 June 1967) smashed this idyllic and idealistic image to smithereens. When Van Denderen returned in 1993 the community had become one in which solidarity was a difficult thing to find. In Peace in the Holy Land the emphasis lay on the day-to-day lives of Palestinians and, to a lesser degree, Israeli colonists. The photographs offered a counterweight to the press photos that were giving an overly one-sided picture of the conflict.

Informal images
Since Peace in the Holy Land Ad van Denderen has returned regularly to the region, and on each occasion he has seen the Jewish and Palestinian populations growing ever further apart. His own photographic style has also changed. His later, colour photographs show the conflict in a much less direct manner, and serve rather as metaphors for what is happening on the West Bank. For instance, they show the practical consequences that the construction of the Israeli West Bank Barrier has had for Palestinians commuting between their homes on the West Bank and their jobs in Israel. In 2003 he photographed the wall that would eventually isolate Abu Dis, an Arab neighbourhood in Jerusalem, from the rest of the city. As the photographs show, at first this wall was no more than a few concrete blocks that residents, young and old alike, continually found inventive ways to surmount. These informal images are a striking contrast to the photographs of the endless queues and violent confrontations that are often taken to illustrate the border between Israel and the Palestinian territories.

Surrealistic and futuristic
In 2012 Van Denderen made a series of quiescent photographs of ‘Baladia’, which looks from a distance like a sleepy desert town but is in fact an Israeli Army training centre. Baladia lies close to the Egyptian border and was constructed as a mock Arab city, complete with mosque, hospital, retirement home, bank, school and cemetery / football field. The complex is used to train Israeli soldiers in efficiently seizing Palestinian settlements. An example of this is the successful seizure of Nablus in 2002, in which the Israeli army, armed with concrete drills, opened a route into the town by going straight through the houses. Burnt-out car wrecks and flapping clothes on washing lines are intended to give Baladia a realistic appearance; in Ad van Denderen’s photographs, however, the city looks surreal. Another unreal and futuristic location is Rawabi, a brand-new Palestinian city built on a hilltop 12 kilometres north of Ramallah. Van Denderen followed its construction, the brainchild of the American-Palestinian millionaire Bashar al-Masri, between 2012 and 2016. Rawabi was designed for the Palestinian middle class, and boasts the most modern facilities and infrastructure – but however solid the city appears, its foundations are shaky. Rawabi is entirely dependent on Israel for its water.

Jerusalem stone
The title of the exhibition is taken from the famed ‘Jerusalem stone’, the specific limestone of which the Old City of Jerusalem’s Western Wall, better known as the Wailing Wall, is made. The wall is regarded as having been the western wall of the Jewish temple that stood on the Temple Mount until it was destroyed by the Romans in 70 AD. All new houses built in the Old City – one of the most hotly contested areas on Earth – must be constructed only of Jerusalem stone.

Ad van Denderen (1943) is interested in the ways people shape their daily lives under extraordinary circumstances. He is a socially engaged photographer who works within a broad political and social context. He regularly returns to places he has photographed in the past in order to document developments. Van Denderen trained in the 1960s at the Graphic Arts School in Utrecht, where his teacher Ata Kandó introduced him to photography. One of his most lauded projects is GoNoGo (2003), for which he spent fifteen years photographing immigrants, refugees and ‘illegals’ seeking a better life in Europe. Other long-term projects include So Blue So Blue (2003–2007), on life in the countries surrounding the Mediterranean Sea, and Welkom in Suid-Afrika (1990–1991/2004/2017–2018). In order to be able to operate independently, Ad van Denderen has always worked as a freelance photographer. His clients have included Vrij Nederland, De Groene Amsterdammer and The Independent. In 2007 he was awarded the Fonds BKVB (Netherlands Foundation for Visual Arts, Design and Architecture) oeuvre prize.

Publication
The exhibition is accompanied by the publication of the book Stone, with photographs and texts by Ad van Denderen. Stone is published by Fw:Books and designed by Hans Gremmen.

Ad van Denderen has been able to continue to work on his photographic projects in Israel and the Palestinian territories in recent decades thanks to support from the Mondriaan Fund and the Anna Cornelis Foundation.
www.huismarseille.nl