The Earth Turns And All Things Slip Away 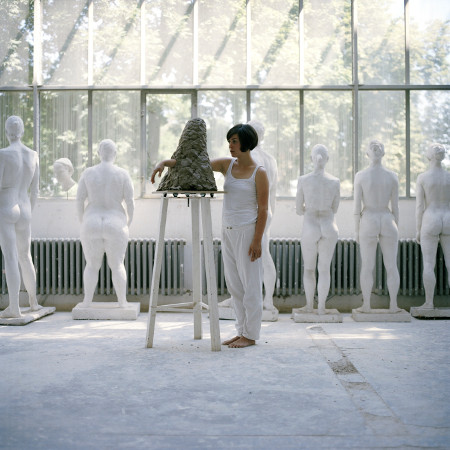 An examination of space-time metaphysics, the conceptual universe, negative turned into positive, absence reversed into presence, all sinking into a landscape of melancholy, eternal frost and diffused light, where we vainly search for the horizon and a point of reference. The surface of the clouds blends into a snowy landscape so much so that the alpinist cannot distinguish between firm ground and a cloud-covered abyss. „I love everything that is white. Even plaster. Its profanity/impropriety doesn’t bother me. I love it because it is nothing. It does not induce anything, it obeys our ideas. It does not lie in the grass like a stone, nor does it grow like a tree. It is just developing,“ Stanislav Kolíbal says in the catalogue of his 1967 exhibition in Nová Síň Gallery. The third dimension was conquered and we languidly attempt to enter the fourth. The White Whale. White is the colour that pervades the whole of the modern 20th century. It complies with the concepts of modernism, rationalism, purism, minimalism, conceptualism, arte povera, reductionism... It lies at the outset of going beyond space. White relates to the spatial concept of Lucio Fontana and his White Manifesto that foreshadowed Yves Klein ́s relinquishment rituals as early as 1946. White is dematerialized International Klein Blue. Entering the emptiness of the white universe heralded a whole range of concepts by Piero Manzoni, Robert Ryman, Stano Filko, and many others.
Concentrated “nothing“ entered into European and American art alongside our interest in Asian cultures. One exhibition that aimed to chart the direct impact of Eastern cultures on American art took place under the title The Third Mind at the Guggenheim Museum in New York in 2009. The 1960s and the ‘70s raised a fundamental question: „What is art defined by? What shapes art?“. Phenomenological research and experiments were often aimed at the dematerialization of art.
Absence was seen as a more urgent form of presence. The semantics of transparency was explored not so long ago in the 2007 exhibition Intocable (el ideal de la transparencia) in Museo Patio Herreriano in Valladolid. In the Czech context, being absent was crucial for the terms and contents of the works of Ján Mančuška; and before him, Stanislav Kolíbal and Jan Svoboda addressed themselves to the articulation of emptiness. Jiří Kovanda, proceeding from a similarly minimalist assumption, conversely referred to the presence and the importance of ignored, or barely visible, phenomena, actions, things and relationships – their existing obscurity and “minute amounts” were exactly the sources of hitherto unexploited energy. In 1996, Jiří Kovanda and Vladimír Skrepl prepared Bílý jídlo (White Food), an exhibition for the MXM Gallery, about which Marek Pokorný wrote: „where the unintelligibility of art ends, the incomprehensibility of life begins”. White as everyday life. White as a universe. White as a journey.
„The ice that still supports people today has become very thin; the wind that brings the thaw is blowing; we ourselves who are homeless constitute a force that breaks open ice and other all too thin ‚realities‘,“ wrote Nietzsche. Narcotherapy and Victorian purism, doubts about the potentialities of the avant-garde, Martin Luther, Otto Hahn, the White Dada exhibition by Thomas Zipp (Galerie Alison Jacques, 2008). The exhibition The Earth Turns and All Things Slip Away would like to continue along in the vein of the played out and even slightly well-worn compositions like White Light/White Heat, White Stripes and the Czech Bílé, mám tě rád (White! I Love You., to carry on with the experiments of the past in a choreography for the present (working within the confines of the modest resources at our disposal, of course). Today, where all islands have been discovered, all places have been visited (?), and all entities are connected, is there still some thrill in imagining a white unblemished surface, a fragile relationship? Can we still conjure up some excitement in thinking up a world of one ́s own? Canvas, paper, the empty wall of a studio or a gallery are some of the only „places“ that can be emptied again and again, reconstructed, painted-over white. But today, perhaps we prefer to loose ourselves in a diffuse climate, casual magic, a ballet tragedy, or a model scaled smaller than 1:1? (Edith Jeřábková)
We would like to thank the following individuals, galleries and institutions for their cooperation: Art Concept Paris; galerie Artandconcept Bratislava; Catherine Bastide Brussels; pan Dušan Brozman Praha; Kontakt. The Art Collection of Erste Group and ERSTE Foundation; Marc Foxx Los Angeles; gb agency Paris; Galeria Luisa Strina, São Paul; Gallery Juliette Jongma Amsterdam; Luhring Augustine, New York; Monitor Gallery Rome; Museum Kampa Praha; pan M. Velfl Praha.
www.huntkastner.com