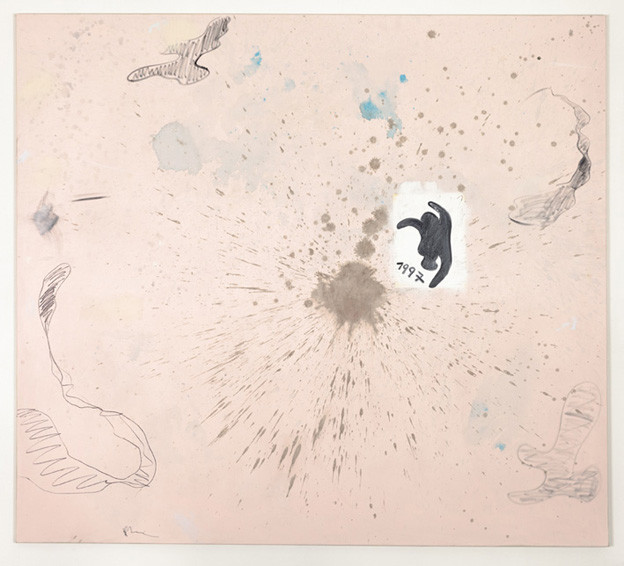 Ibid. is pleased to present its first solo show with Vienna-based artist Alex Ruthner entitled Unreliable imitation of life. This will be his first solo exhibition in the UK.

Alexander Ruthner makes large-scale paintings that demonstrate both an interest in composition and form, and a dexterity with classic materials. Style and genre overlap, the representational and the abstract converge, image, texture, and pattern have equal space.

Anachronistic,Ruthner conjures preceding forms of minimalist painting, while interspersing contemporary signs - such as smiley faces, cartoon eyeballs and balloons and iconic media images like Mickey Mouse that are painted over a backdrop of light pastels and grey backgrounds. Further peripheral references in this series of work include pinned up notepad paper and what could be cut out source images of people and scenes. In The reception of the present against the background of history (2014), the artist has painted tape holding up one such image using resin to mimic the texture of the implied material. There is also a block of bold stripes, in contrast to the softer landscapes of the other works, further showing Ruthner's interest in the materiality of painting. The blurring of foreground and background underlines the painting’s intrinsic feature of flatness.

In much of Ruthner’s work, the paintings include some kind of nostalgia and love for subcultures.

These aspects of the superficial are crucial to Alex Ruthner’s topics. The connotations of coolness and trivial gestures seem to be arbitrarily disseminated in his paintings.