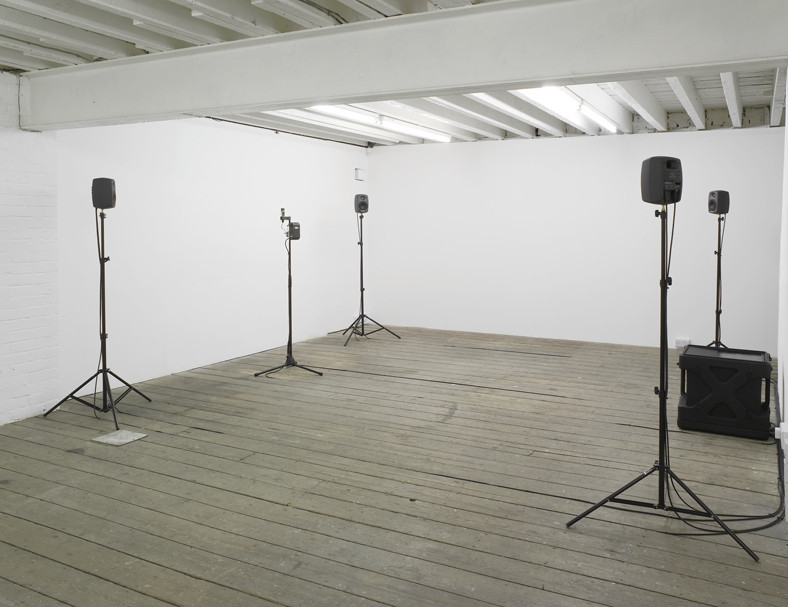 Ibid is pleased to present its first solo show with Carsten Nicolai, entitled Observatory.
Observatory will present works exploring several kinds of particle phenomena, from the microscopic to the macroscopic, through three installations attempting the visualisation and embodiment of diverse physical occurrences. Through sculpture, photography, video and sound, Nicolai’s artistic investigation unfolds to address phenomena of scale increasingly removed from the lived experience, as the visitor ascends the different levels of the gallery.
On the ground floor, the installation thermic is a visualisation of usually invisible heat waves floating through space. Hot air produced from a streaming heat source made visible by a spotlight rendering shadows of it onto the wall. Like a mirage, we can see fluctuations of air thus realizing that we are not surrounded by empty space but by physical, flexible matter.
The video on the middle floor, future past perfect pt. 04 (wolken) (2013), shows clouds that appear almost as an optical illusion - the camera zooms in while different shots of clouds are interspersed together. Coming from the same body of work, several prints from the wolken series are shown along with the video. The clouds in these seven prints reveal resemblances to both micro and macro structures.
In particle noise on the top floor of the gallery, radioactive particles and magnetic noise are captured in sound, with Geiger counters being the source for a sound installation. The traces series of photographs, exhibited alongside this installation, document the numerous traces of cosmic and terrestrial radiation, which ionize the gaseous ethanol steam inside a cloud chamber.
Carsten Nicolai is one of the most renowned artists working at the intersection of art and science and is infamous for his minimalist approach. Under the pseudonym noto, Carsten Nicolai experiments with sound to create his own code of signs, acoustic and visual symbols. As alva noto he leads those experiments into the field of electronic music. Besides performing in clubs and concert halls, Nicolai has presented his audio-visual pieces at museums like Solomon R. Guggenheim museum in New York; San Francisco Museum of Modern Art; Centre Pompidou in Paris; Kunsthaus Graz in Austria; and the Tate Modern in London.
After his participation in international exhibitions like Documenta X and the 49th and 50th Venice Biennial, Nicolai's works were shown in two comprehensive solo exhibitions at Schirn Kunsthalle Frankfurt, Germany (anti reflex), at Neue Nationalgalerie in Berlin, Germany (syn chron) in 2005, at Haus Konstruktiv, Zurich (static fades) in 2007 and at CAC, Vilnius (pionier) in 2011. Recent solo exhibitions include Unidisplay, Musée d'Art Contemporain, Montréal, Canada; Hangar Bicocca, Milan, Italy; Pionier, CAC, Vilnius, Lithuania; Galerie EIGEN + ART, Leipzig, Germany; The Pace Gallery, New York, US; and Filter, House of Art, Budweis, Czech Republic. In 2012, he was commissioned to build his lfo Spectrum in the Olympic Park village for the London games.
www.ibidprojects.com