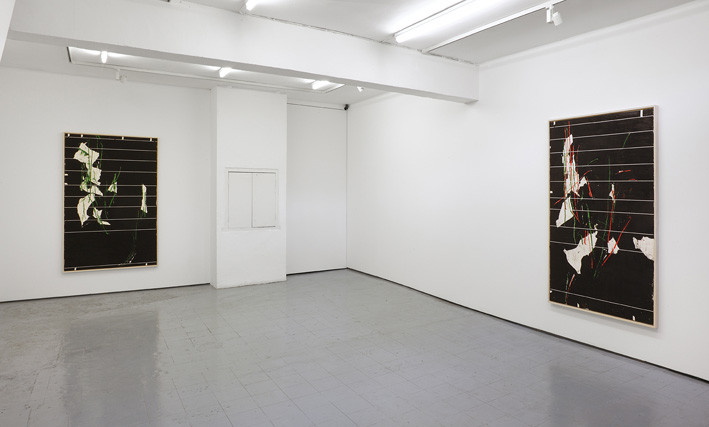 People on Sunday a project by Olivier Castel, Katie Guggenheim and Justin Jaeckle

IBID PROJECTS is pleased to exhibit the works of Harold Ancart, Rallou Panagiotou and Colin Snapp together for the first time.

Harold Ancart’s works on paper, wall drawings and sculptural installations derive from a principal of immediacy typically associated with conventional drawing. For Ancart, drawing is transitional - the means to open a sculptural field and activate a given physical space. His overall practice is a delicate negotiation between figuration and abstraction, between planning and intuition, balancing the precision of an idea with the poetry of its accomplishment.
Preferring to work in-situ, Ancart ultimately allows his intuition to guide his creative process as he engages with and interferes in the structure, proportions, situation and surface of a space. The ephemerality of his materials, which include loose pigments, twine and soot, encourages a reading of his work as a visual time capsule in three-dimensional space. Born in Brussels in 1980, Harold Ancart lives and works in New York and Brussels. Recent shows include Unscene II, Wiels, Brussels, BE (2012); Sous les Palmiers, la plage, La Chaussette, Brussels, BE; Melanchotopia, Witte de With, Rotterdam, NL (all 2011); and Out of The Box, The Emily Harvey Foundation, New York, US (2010).

On the top floor is People on Sunday, a project by Olivier Castel, Katie Guggenheim and Justin Jaeckle that responds to the site of the top floor of IBID, turning the gallery into a live cinema through which to watch the action in Hoxton Square below. The project is titled after the 1930 silent German film, directed by Curt and Robert Siodmak from a screenplay by Billy Wilder. The film features five ‘non-actors’ (including a wine seller, taxi driver, film extra and model) playing versions of themselves, and follows their leisure pursuits over the course of one summer weekend in Weimar Berlin. A deliberate entanglement of fiction and reality, the film could be considered a very early precedent of contemporary scripted reality television. The film opens with the prologue “Filmstudio 1929 presents its first experiment: People on Sunday, a film without actors. These five people appear in front of the camera for the first time, today they are all back in their own jobs.”
For the exhibition, Castel, Guggenheim and Jaeckle have invited a range of artists and writers to contribute short texts of imagined scenarios and scenes that could be viewed in Hoxton Square over the course of the exhibition, functioning as intertitles or speculative screenplays for the reality unfolding outside of the gallery, and casting the occupants of the square as characters in a real life, real-time movie. It is anticipated that some of these texts will be realised during the show.