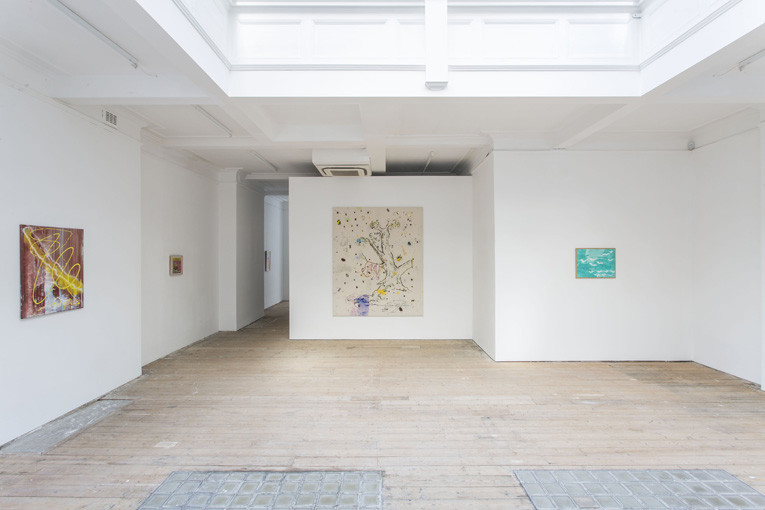 The current group show at Ibid. London considers how iconographies, symbols and colours evoke a sense of familiarity that usually comes to mind when one thinks of the notion of home in light of consumer culture. These are certain codes that humans enjoy and create a feeling of intimacy, making one want to acquire, live and dwell amongst particular objects. Fine art values other codes to establish an identity and also make an artist's work their own.

Razvan Boar's practice is distinguished by various distancing devices, each seeking to disrupt the anticipation of narrative raised by a certain figuration. Areas of his works include closely worked paint, fragmented planes or far looser at times, cartoon-like sketching. The works seen at Ibid show the lines between culturally entrenched representations of commercialism, such as advertising, children’s book illustrations and comics and mixes them with colourful, minimal abstract mark making.

Much of Robert Gober’s work refers to domesticity. However, Gober strips domestic iconography of its usual associations with nurturing and refuge. Instead, the home is revealed to be a site of trauma. Included in the show will be two works on paper showing adverts from an unnamed local supermarket selling whole roast pigs, something a family might purchase for a celebration or holiday to be enjoyed together, while laying bare the macabre nature of the feast. Much like Paul Thek’s equally repellant slabs of meat, Gober’s work here is gross and comical.

Paul Thek, a self-described “mystic showman”, imbued his work with an idiosyncratic symbolism deeply rooted in his personal relationship with Catholicism and his preoccupation with death, ritual, and the symbolic function of objects and images. The exhibition includes two works by Thek, a seascape and a skyscape with birds, which resemble posters of tranquil scenes or exotic destinations that one might pin up in their home.

Inspired by eighteenth century British artists including Thomas Gainsborough and Joshua Reynolds, Ross Chisholm’s paintings consist of historical images that explore the aura of art. His practice seeks to examine and exploit the value of art, in particular, commissions, and the status they bring - what determines which artists’ works reach museums and collections and further, what trickles down into the consumer market via reproductions such as postcards and prints.

Francis Alÿs‘ work is centered on the observations of, and engagements with, everyday life. His multifaceted projects include public actions, installations, videos, paintings, and drawings; the artist himself has described his work as “a discursive argument composed of episodes, metaphors, or parables.” Out of the Last Clown is part of a series of works by Alÿs that recounts a genuine episode in the life of the artist and his friend Cuauhtémoc Medina, in which an art critic with whom Alÿs was walking when he tripped on a passing dog and fell. This accident led to a discussion about art, humour and laughter, and the whole aspect of the artist as the last great entertainer and the way the art industry as such is moving more and more towards a kind of entertainment industry. It could also be looked at as the fall of the critic in rise of more market driven interests.

Sigmar Polke’s primary devices, parody and pastiche, refuse the expectations of stylistic consistency and subjective stability, in some work, appropriating the pictorial shorthand of advertising. Highly attuned to the differences between appearance and reality, he was wary of the notion that there might be one universal truth. His relentlessly inventive works, ranging in size from the intimacy of a notebook to monumental paintings, collapse conventional distinctions—between high culture and low, figuration and abstraction, the heroic and the banal—allowing flux, rather than stability, to prevail. Polke exerts an international influence, appreciable in Razvan Boar’s work, as well as his compatriots Martin Kippenberger and Albert Oehlen.
www.ibidprojects.com