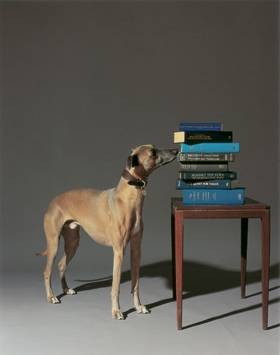 OLIVIER RICHON
"The Spirit is a Bone"

The Spirit is a Bone consists of 8 framed c-type photographs of animals and objects taken in the windowless, interior space of the studio. These photographs use light and colour to enhance the stillness and muteness of the things represented. Objects become petrified nature and culture.
The Spirit is a Bone is an expression found in Hegel’s discussion of physiognomy and phrenology. It is somehow a baffling statement, which mixes the high and the low, the mind and the body. Here, the eminent philosopher exposes the affirmative force of language, which enables a scandalous identity between rigid dead matter and the fluidity of thought.
Bones are also at the core of Imre Hermann’s study of the fantasy of the os priapi. She investigates the belief in a penis with a bone, an organ thus capable of breaking but also of hurting. The fantasy of the os priapi, named after the well endowed and goat like friend of Bacchus, enables the pioneering analyst to establish a startling bone iconography, which comprises broken teeth, decapitation, skeleton-like slimming and calcium addiction. It also includes a zoological classification of dogs and apes whose reproductive organs are endowed with the notorious rigid cartilage.
Nature teaches dogs to seek the calcium they need. Lautréamont’s hero, Maldoror claims that dogs, like himself, also have a need for the infinite. In classical bestiaries, the dog’s spirit is on the side of loyalty, jealousy. Its sleep is akin to the meditative torpor induced by melancholia. Yet since the Greek Cynics, the dog is also celebrated as an emblem of the lower senses, promiscuity and lack of shame. In Baudelaire’s the Dog and the Perfume Bottle, the faithful animal shrieks back in horror at the smell of the perfume. Baudelaire compares the poor animal to his public, who prefers carefully selected filth to a delicate work. Yet it isn’t easy to separate work and filth. As the author of the Spirit is a Bone put it, high and low are “intimately connected, just as speech and kissing on one hand, and eating, drinking and spitting, on the other, are all done with the mouth”.
Olivier Richon was born in Lausanne in 1956. He studied at the Polytechnic of Central London, where he was taught by Victor Burgin, and graduated with a BA (Hons) in Film and Photographic Arts in 1980 and a Masters of Philosophy in 1988. In 1991, he received the Camera Austria award for contemporary photography. His work has been exhibited internationally since 1980 and is in many public collections, including the Victoria & Albert Museum, London; the Musée d’art moderne de la ville de Paris; Museum Folkwang, Essen; the National Museum of Modern Art, Kyoto; the Brooklyn Museum, New York and the National Gallery of New South Wales, Australia. He currently directs the department of Photography at the Royal College of Art, London.
Recent exhibitions include The Goat, with Mark Fairnington, at Medievalmodern, London (2004); Trilogia, with Mimmo Paladino and Richard Artschwager at Galleria Civica di Modena (2004); The Photographed Animal, at Museum Folkwang, Essen (2005). This summer, his work will be in Zoo, at the Centrale Electrique, a new contemporary art space in Bruxelles.
Real Allegories, a monograph of Olivier Richon’s photographic work was commissioned by Ute Eskildsen and has recently been published by Steidl.

For more information or images please contact the gallery on +44(0)208 983 4355 or email info@ibidprojects.com