Sights from a Steeple 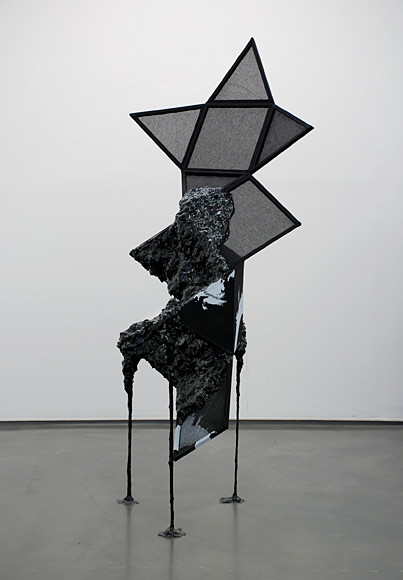 Skafte Kuhn, The Sky's Gone Out, 2007
SIGHTS FROM A STEEPLE | Group Show


IBID PROJECTS is pleased to present ‘Sights from a Steeple’, a group show of six international artists, each of whose work deals with issues such as a romance that has failed, a Poe-esque approach to the subject of the night or attitudes of austerity and self-restraint. The exhibition takes its title from the chapter of a book by the Nineteenth-century novelist Nathaniel Hawthorne. Each story in the book had previously been published or told before. In the chapter ‘Sights from a Steeple’, an all-seeing narrator surveys the world around him from the heights of a church tower. His reflections create a sense of dizzying vertigo but also relay a sense of liberation that can come from looking at an environment from a distance, whereby the past and future can be seen together in one moment.

In a similar way, many of the artists in the exhibition can appear forward-looking in their vision whilst equally sharing a fascination for pre-Modernist canons. Through multiple references from Post-punk music to Nineteenth century literature and scientific photography, each have found similar possibilities in the past in the way that music groups such as The Cure or Joy Division explored Nineteenth century links between disaster and romance, and saw them as closely related; or, looked at recent subcultures that are still somehow unknown or have already been claimed by others. Additionally, the show can be described as an antidote to the traditional summer exhibition. Some of the works are moody and foreboding, black and monochromatic, contain obscure references, or are formed purely from text and diagrammatic structures.

Ulla von Brandenburg (Germany. b. 1974) works with different media such as drawing, video, film, space installation and performance. In her film Geist (2007), a figure dressed as a ghost activates a film camera reflected in a ball, and walks into the distance leaving the reel running until the moment that it stops. Her works reference Victorian theatricality and "Tableaux vivants”, exploring how such illusions still affect our sense of reality.

Gregor Hildebrandt (Germany. b. 1974) has previously worked with cassette and recording processes to explore the ways in which these technologies affect our perception of material. In his monochrome canvas All Cats are Grey (The Cure) (2008) he imbues the traditional, blank form with new possibilities through the simple act of laying audiotape across the surface. Here each track is punctuated by the addition of discrete grey marks.

Jorinde Voigt (Germany. b. 1977) has similarly sought to visualise the experience of popular music as a collective experience, in her case through diagrammatic drawings of intricate complexity. They appear like organic forms – repeating and multiplying their own sense of internal logic. However, on closer inspection they refer to tangible data, combining a maelstrom aesthetic with a rigid form more akin to scientific study or mathematics.

For the exhibition, Karl Holmqvist (Sweden. b. 1964) has remade a work that was first exhibited in 1991 during a time when he was living and attending spoken word recitals in New York. In Give Poetry a Try (1991-2008) he brings the sensibility of such events into the gallery setting, simply encouraging viewers to try out the minimal but ancient act of sharing one's thoughts and feelings through writing.

Barbara Wolff (Romania. b. 1980) is currently studying at the Royal Academy of Arts where she recently exhibited her richly decorated mixed media sculptural collages formed from materials such as carpet, plants, jute, paper and resin. Her work commonly references a decadent world where nature and opulence are combined; where octopus’ tentacles and the night sky converge to form strange, recurring patterns in ways that recall both Las Vegas architecture and the spirit of novels such as ‘Twenty Thousand Leagues Under the Sea’.

Skafte Kuhn (Germany. b. 1969) works with sculpture and text to combine icons of 20th Century popular culture with figures from the past such as the poet Schlegel, one of the leaders of German Romantic movement, or Tieck or Shakespeare. In the etching on glass Untitled (Hervor aus Gebirgen des Nichtmehr / Coming from the mountain of the bygone) (2007) Kuhn presents a diptych: one half showing a shot of the English Post-Punk band Bauhaus, the other a reproduction of their lyrics translated into antiquated German (whilst his sculptural works in the past have been made out of band t-shirts or engraved with songs).

Because of, rather than in spite of, this aesthetic sensibility that could be described as shadowy or austere, displaying an almost Protestant attitude to materials, these practices suggest a richness of content that is borne from studious research, that invites a certain level of engagement from the viewer and has an expectation of investigation.