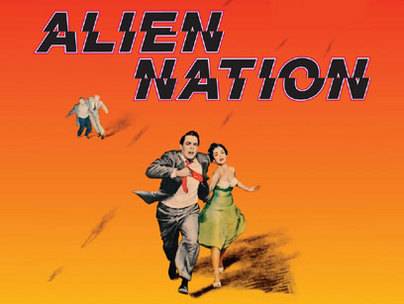 The first project of its kind, Alien Nation is a timely, ambitious and thought-provoking exhibition co-produced by the ICA and the Institute of International Visual Arts (inIVA) that explores the complex relationship between science fiction, race and contemporary art.

In sci-fi cinema of the 1950s and '60s, Cold War fears of invasion, communism and nuclear war were played out in films that projected the anxieties of the present onto the future. In recent years many artists have similarly used science fiction and extra-terrestrial forms to explore racial difference and as a potent metaphor for the threat of the outsider.

Alien Nation is curated by John Gill, Jens Hoffmann and Gilane Tawadros and presents the work of twelve contemporary international artists who explore themes of 'otherness' and 'difference' through the language and iconography of sci-fi. The witty and provocative artworks on display encompass film, sculpture, photography, multi-media installations - even 3-D painting - and expose a disturbing contemporary narrative in which the media perpetuate a terror of 'invasion' from immigrants, asylum seekers (or any racial, cultural or ethnic 'other'), making such 'outsiders' as the dominant threat to both family and national stability.

Mingling fact and fiction, science and art, Alien Nation will also show a collection of original sci-fi film posters from the 1950's to present day, courtesy of The Reel Poster Gallery, as well as extracts from contemporary and archive science fiction films as part of this unique exhibition that reveals our innermost fears and fantasies about the outsider.

The exhibition will be accompanied by a significant publication with contributions from the curators and David Alan Mellor.