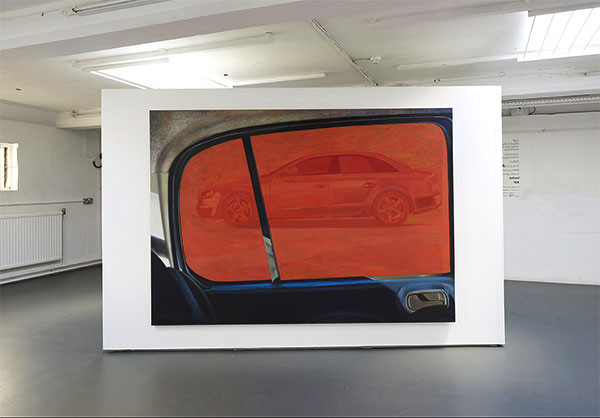 Allison Katz has produced a new set of paintings in response to her commission for a solo exhibition at fig-2. Engaging with the parameters of the fig-2 studio, in combination with her most recent exhibition installation in Freiburg, Katz will present two specifically scaled paintings that comply with the mobile wall units. Shaped into stand alone monoliths, the fig-2 wall units support the paintings which appear to float in space. Katz’s response to the architecture is furthered in the subject of the paintings, where an interior is mirrored within itself, and where the memory of a lived experience is doubled in its image as a painting. Katz is interested in collating moments of transition and observation, from glimpse to contemplation, and voices these differing durational qualities. The variety and interplay of surfaces and techniques are echoed in the themes and motifs, where experience sublimates into content. The exhibition is complemented by take away posters that Katz produced for the occasion, to pronounce the movement encoded in the paintings and the premises.