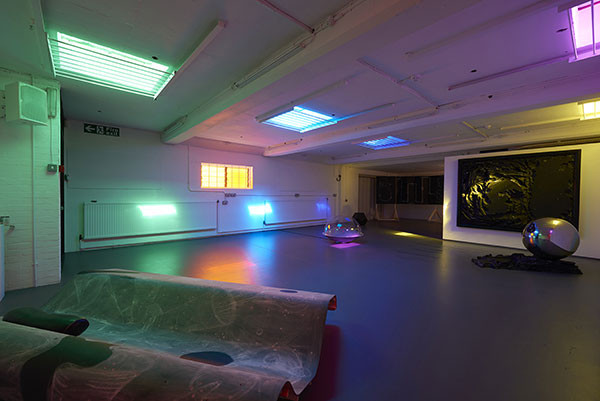 Artists David Cheeseman and Ole Hagen collaborate with astrophysicist Roberto Trotta for week 20 at fig-2. Their exhibition entitled ‘All There Was’ predicates a post-Newtonian orrery, concentrating on the depiction of all-there-is in its modelling. The exhibition builds its premises by looking into the amount of data gathered to explore the cosmos and elucidate our understanding of it within the given parameters known to us. Basing its subject-matter on the dichotomy of presentation and the real, ‘All There Was’ is an aesthetic and intellectual speculation of post-Euclidean Geometry basing its forms on hypothetical modelling of abstract concepts such as dark matter, dark energy. Cheeseman, Hagen and Trotta will highlight the transformation of fig-2 premises into a temporary laboratory of ideas, through their performative conversation on Monday evening that will speculate about the ‘Big Picture’, the grand scheme of the reality we reside in.

fig-2 would like to thank the Science and Technology Facilities Council for their generous support.

David Cheeseman is a practicing artist and senior lecturer in Fine Art at Birmingham City University. He is an interdisciplinary practitioner working within the disciplines of sculpture, installation and photography as part of the CFAR research group. He has been awarded the Gulbenkian Rome Scholarship in Sculpture and The Henry Moore Fellow in Sculpture at Coventry University. His current research interests are primarily concerned with exploring the relationship between truth and illusion with respect to the materiality and methodologies of science and (stage) magic. He recently completed a residency at The Lydney Park Estate in association with Matts Gallery London.
Ole Hagen CV

Roberto Trotta is a theoretical cosmologist at Imperial College London, where he studies dark matter, dark energy and the Big Bang, and is a STFC Public Engagement Fellow. Roberto is a passionate science communicator and the recipient of numerous awards for his research, outreach and art and science collaborations, including the Lord Kelvin Award of the British Association for the Advancement of Science and the Michelson Prize of Case Western Reserve University. Trotta’s award-winning first book, ‘The Edge of the Sky: All you need to know about the All-There-Is’, endeavours to explain the Universe using only the most common 1,000 words in English. Roberto was named as one of the 100 Global Thinkers 2014 by Foreign Policy, for ‘junking astronomy jargon’.
www.ica.art