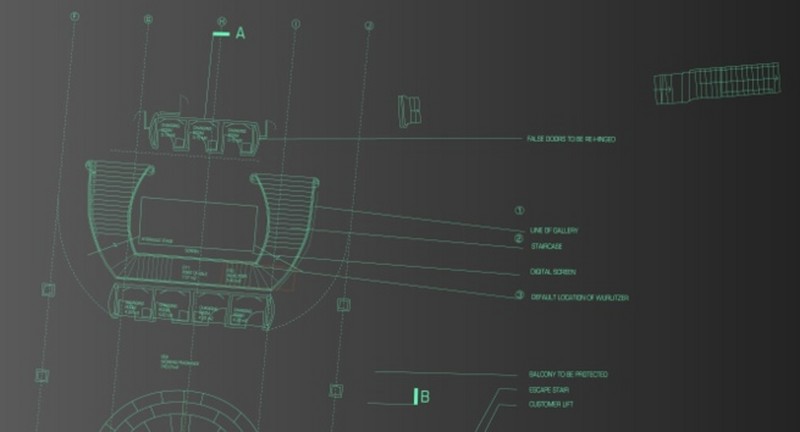 For Lives on Wire Hawser presents a site-specific installation featuring new sculpture and a digital video work, developed through her investigative research into the life-span of the cinema organ. Invented in the early 20th century by the British telephone engineer Robert Hope Jones, it was ubiquitous during the silent-movie era, prior to the film industry’s introduction of synchronised sound. Employing the principles of the telephone exchange, it was developed to replace cinema orchestras and reduce manpower with an individual console and organist. The device worked by issuing electric and pneumatic signals from a keyboard console to a remote rank of pipes and instruments established within the infrastructure of the cinema building. Many of these instruments, due to their scale and complexity, remain silently embedded within the architecture of former cinemas to this day.

The exhibition title derives from a passage of text in a silent documentary about the John Compton Organ factory in London. Presented in a font typical of the era, this evocative statement describes the cabling section area of the factory, and attributes human form to the machinery that ‘lives on wire’. The documentary encapsulates the paradox of an instrument that was briefly in fashion, although it embodied a wealth of electromechanical mechanisms and principles still prevalent today. Hawser’s new work seeks to analyse the theoretical and physical attributes of a variable electronic resistor used to illuminate the art deco surround of the instrument during cinematic performances, known as the cinema organ colour changer.

For the exhibition, the relationship between the colour changer mechanism and the illuminated console is re-established and demonstrated using the ICA’s Lower Gallery lighting system, to control the colour and intensity of the gallery's lights. In doing so, Hawser explores the potential for obsolete objects to be appropriated and transformed for contemporary use, a process often referred to as skeuomorphism. Accompanying the re-animated colour-changer is a digital video work that surveys and examines an existing cinema organ in its original installation, a building which has now become a Regent's Street store, illustrating the disembodiment of the machine from cultural consciousness and its passage from sound-producing object to silent relic.

Supported by the Eloise Hawser Exhibition Supporters Group including Halo Lighting and The Zabludowicz Collection.