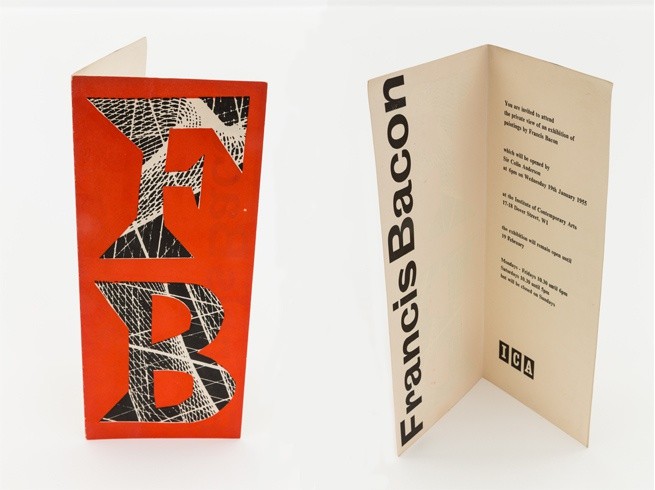 FB55 is an archival display of Francis Bacon’s show held at its former premises on Dover Street in 1955. At the time it was Bacon’s first ever solo institutional exhibition in the UK. The presentation in the ICA Fox Reading Room will include a display of documents, installation photographs, press reviews, invitation cards and publications.

Having represented Britain at the Venice Biennale the previous year, alongside Reg Butler, Lucian Freud and Ben Nicholson, surprisingly little is known of about Bacon’s 1955 ICA exhibition. It was organised with the help of philanthropist, collector and ICA founder Peter Watson - then the richest man in Britain whose death a year later was shrouded in mystery. An inspiration to a younger generation of artists, Bacon stood apart from the more youthful Independent Group (IG) whose direct use of photographic material would eventually become synonymous with the birth of Pop Art. That said, Lawrence Alloway - the leading critic of the day - would later cite Bacon, not Richard Hamilton, as the founding father of Pop Art; possibly in reference to Bacon's dependence on the kind of photographic imagery derived from films, popular magazines and newspapers. Referring to his IG colleagues as 'mixed-media jackdaws', Bacon further distanced himself by claiming the photographs that littered his studio floor were useful to him in much the same way that a traditional painter might use a life model. As was his whim, Bacon often recontextualised these images, such as those found in scientific textbooks, allowing them to take on sexual connotations.

Given the hue and cry surrounding homosexuality at the time of the 1955 ICA show, Bacon and Watson risked presenting a display of works that was arguably ‘queer’ (as was their persuasion), leading to one visitor insisting that the police be required to examine Two Figures in the Grass (1954). Sourced from an early Eadweard Muybridge photograph, the police later concurred that the painting was merely a scene of two men wrestling. Thereafter, one can only speculate how images of the Pope played out alongside scenes of intimate male encounters produced around the time of Bacon's stay at the Imperial Hotel in Henley-on-Thames. In keeping with the ICA's radical art and culture remit, this exhibition has been referred to as one of Bacon's more confrontational shows, combining images of the Catholic state with Bacon's gilded gutter life.

Francis Bacon was born in Dublin on the 28th October 1909. The family’s first residence in Ireland was Cannycourt House near the Curragh, Co. Kildare, an area renowned for its horse breeding and racing. Bacon’s only prolonged experience of formal schooling was as at the Dean Close School, Cheltenham, where he boarded from 1924 to 1926. At the age of 23 Bacon painted his first truly original work entitled Crucifixion in 1933. In 1945 Bacon exhibited his Three Studies for Figures at the Base of a Crucifixion at the Lefevre Gallery in London. In 1954 he exhibited with Ben Nicholson and Lucian Freud in the British Pavilion at the Venice Biennale. Bacon spent considerable periods of time in Paris during the 1970s. Over the course of the next fifteen years, solo exhibitions and retrospectives of Bacon’s work were held around the world. These spanned several continents, from Madrid and Barcelona in 1978 to Tokyo, Kyoto and Nagoya in 1983 and Washington D.C. in 1989. In 1985 Tate held a major retrospective with 125 works and the director’s statement described the artist as the ‘greatest living painter’. Three years later a retrospective of just 22 works was held in the New Tretyakov Gallery in Moscow. It was the first show by a major Western artist to be mounted in the Soviet Union. As Bacon entered his seventies his work continued to evolve. He met the challenge of landscape, which he had largely avoided since his Van Gogh works of 1957. During the 1980s, Bacon’s simplified his pictorial language, pairing it down to its essentials. The human body was savagely abbreviated to a stump and a pair of legs (Study of the Human Body, 1982) or starkly implied by its residue (Blood on the Floor–Painting, 1986). His technique became, if anything, more nuanced and refined. His palette divided between paintings with searing red/orange backgrounds and those with a cooler tonality of greys, creams and pale blues. Among the most impressive achievements of his last decade were two portrait triptychs, Three Studies for a Portrait of John Edwards, 1984 and Study for Self-Portrait, Triptych, 1985-6. Both paintings conveyed a quality not often associated with the artist: an imposing sense of calm. Francis Bacon died in Madrid on 28th April 1992.

The Fox Reading Room was made possible by the generous support of the Edwin Fox Foundation.
www.ica.art