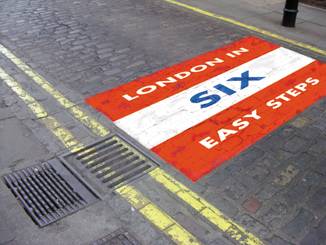 
Six London-based curators, representing a diverse range of curatorial approaches, have been invited by ICA Exhibitions to present their interpretation of the current artistic and cultural life of London. Each curator will organise a week long exhibition which identifies the shifting realities that make up the city from their particular perspective.

The exhibition aims to explore not only a geographical and physical context but also to view London as a theoretical backdrop against which artists and curators operate both consciously and unconsciously. In the aftermath of the ‘Young British Art’ hype, a new generation of artists has emerged which is disconnected from the spectacle and celebrity that distinguished the 1990s art scene and is suggestive of a less insular, wider cultural vista. London is now a truly international city, home to a global array of artists and curators who effortlessly draw on models, styles, technology and influences from across continents in the creation and presentation of art. While attempting to make sense of this significant shift within our cultural landscape, this exhibition has been deliberately conceived to give a platform to multiple viewpoints which reflect the infinite variety of contemporary art production and discourse.

London in Six Easy Steps will offer audiences an unrivalled opportunity to experience and engage with six very different, vital perspectives of London and its art scene.

Each week the curators will give a personal introduction to their exhibition and discuss why they have chosen their particular approach in response to the invitation from ICA Exhibitions. The curators will also select a resonant film to be screened at the ICA during the course of their exhibition. Further talks and discussions led by key cultural commentators and practitioners and inspired by issues that the shows raise will take place Wednesdays – Saturdays throughout the run of the exhibition in the ICA upper galleries.

As a starting point for her London ‘view’, Catherine Wood took inspiration from the 16th century emblem or heraldic badge, a graphic and symbolic token that historically represents a family or nation. In a display reminiscent of a stage set or ‘habitation’, artworks from artists such as Cerith Wyn Evans, Pablo Bronstein, Mark Leckey will form an emblematic, self- reflective and ‘model’ view of London that combines image, architecture and text.

Interventions, events and critical responses to the increasing privatisation of public space in London are the focus of this week’s show, which will use the ICA as a base-camp for a range of activities (from ‘urban climbing’ to satellite mapping) that confront urban planning schemes in the city and provoke debate about the regeneration and recyling of space. The ICA gallery will house texts, screenings, transcripts and other works, which monitor, track or challenge diverse and thought-provoking projects that engage with the recyling of space. There will also be a series of commissioned works off-site.

A stopped clock, like a tourist’s photograph of Big Ben, becomes a symbol of itself, a recursive image that does not keep the time but travels through it, displaying a moment from the past, or the present, or the future.

‘Even a Stopped Clock..’ thus reveals in its title an interest in artworks, ideas and ideologies that are neither entirely new nor conveniently or comfortably absorbed as ‘retro’. With works by Eduardo Paolozzi, Colin Self, Wyndham Lewis as well as newly-commissioned works by London-based artists Milena Dragicevic, Keith Wilson, Steven Claydon and Gareth Jones this show will surprise, provoke and touch on how the ghosts of the past haunt our present and future understanding of London.

Guy Brett’s selection of work by performance artist David Medalla conveys how local experience can provide a telescopic view on wider global issues. David Medalla’s complex immersion and artistic reaction to London over the last 45 years is represented by a body of work that is idiosyncratic, poetic, political, personal and historical. Photographs of Medalla’s Impromtus, stylized performance vignettes, which are very much ‘of the moment’ will be displayed alongside new works including Cosmic Wrestling, a live piece which pits late artists Marcel Duchamp and Joseph Beuys and reflects an ongoing response to the city.

Taking its title from a conference of the same name held at the ICA in 1986, this project revisits mid to late 80s audio-visual culture in London. Portrayed through a prism of works and documents that reflect a city in transition, The Real Me is reflective of the many voices and visions that have helped shape London’s cultural scene. This exhibition includes works by Sonia Boyce, Susan Hiller, Isaac Julien and Keith Piper.

The well-known East End pub, The George and Dragon, favoured hang-out of artists, critics, writers and theorists, will be transported to the ICA to display a radically different perspective on the London arts community. In order to convey the ‘George and Dragon experience’, the bar and many other elements from the pub will be recreated (and recontextualised) within the ICA gallery space. Alongside the drinks, other events on offer range from staged and impromptu performance, to celebrity bar-staff and guacamole-making.

A publication, containing an essay by Jens Hoffmann, Director of ICA Exhibitions and guides to all six shows will accompany the exhibition.


© Photograph by Will Cunningham
www.ica.art