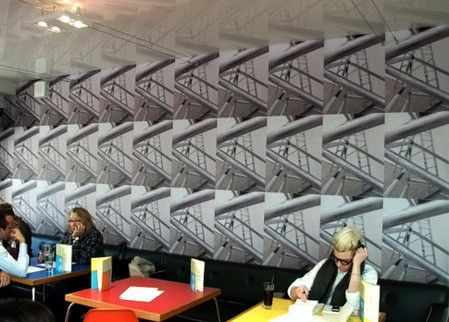 "The work depicts the ICA's main gallery space photographed on a Thursday in November 2010. It was instantly clear to me that this work had to be made on site, to portray and reflect the current state of the ICA. A certain notion of change was evident on the day that I visited; I sensed a spatial tension, of something awaiting, be that only the forthcoming new show or something much broader. I was about to leave after a meeting, but suddenly realised what was going on in the gallery space. No one was present and there was no art around, just empty walls with a strange but intriguing pattern of unpainted areas where the works of the previous show had obviously hung. And, there were plenty of tools around. It was just after 5h30 pm. Call it the ‘afterhour.’" – Oliver Godow
The ICA café is the site for an ongoing series of ‘billboard’ commissions. Artists are invited to contribute works for the bar wall, considering the public and social nature of the café environment. Previous works by Freee, Karl Holmqvist and Scott King have occupied the space, with the latest commission being produced by artist Oliver Godow.
Oliver Godow’s project considers the ICA as a space in flux, both physically, as it undergoes a process of transformation in dialogue with 6a Architects and ideologically, as it considers and reconsiders the shape of its programme, and the position of the ICA within the cultural landscape of London and beyond.
Born in Luebeck, Germany and now currently residing between London and Germany, Godow is a photographer who takes the medium beyond documentary, into the realm of painting and sculpture. He is well-known for his exploration of the architecture of spaces, particularly in periods of transformation. In 2004, he underwent a twenty-month residency in Camden Arts Centre, documenting the building as it was redeveloped.
Godow’s project for the ICA is an on-site photograph of the gallery during the installation of the New Contemporaries exhibition. Godow is particularly interested in how the ICA’s many different spaces can appear fragmented, and how they have the potential to segregate art forms. As a result, he has brought a part of the gallery into the bar, asking us to reconsider our experience of both spaces. As the image is repeated across the ICA’s billboard, the recognisable object, the ladder, is increasingly abstracted. The end result is a futuristic, geometric pattern that only reveals itself on closer inspection as the gallery on the other side of the wall.
www.ica.art