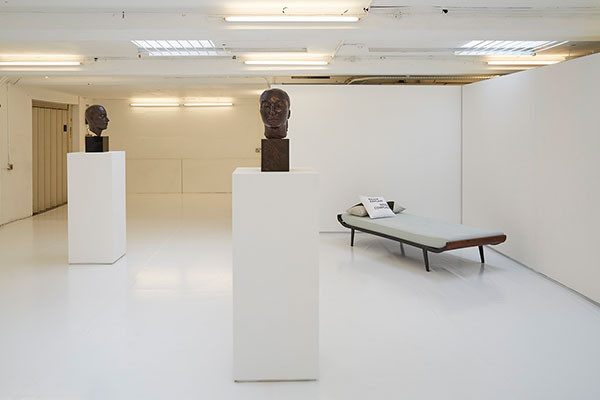 Oreet Ashery marks a moment in time for her project Revisiting Genesis at fig-2. Revisiting Genesis is a web series looking at the processes of dying, digital afterlife and legacy, outsider communities, friendships and reincarnations of women artists. Launching in Spring 2016, the series feature a nurse who creates biographical slideshows for those actively preparing for death, and Genesis, an artist in need of a slideshow.


At the fig-2 premises, Ashery embarks on a two staged exhibition, inviting the Death Metal band Anoxide and artist duo New Noveta to realise a colliding performance at the opening night, and an installation to follow. Instigating the embedded condition of death in the everyday and highlighting its presence, Ashery transforms the space into a place for contemplation and formation of a creative endeavour. Ashery’s all white environment includes two bronze busts by modernist sculptor Dora Gordine: a self-portrait and a rendition of one of her supporters, the art historian and museum director Sir John Pope-Hennessy, and a photograph depicting Amy Winehouse with her producer Mark Ronson. The installation is accompanied by an excerpt from Alfred Hitchcock Presents. In preparation for the web series, a two-day casting session will take place at fig-2 for Genesis’ friends and people actively preparing for death. To register for the auditions please visit the open call out. The weeklong programme will expand with a screening of Afterlife by Japanese director Hirokazu Koreeda on Thursday evening.

Oreet Ashery is an artist living and working in London. Recent solo projects include: Party for Freedom, an Artangel commission, 2013; The space for Freedom is Getting smaller and less transparent, Overgaden, Copenhagen, 2014; The World is Flooding, a Tate Modern Turbine Hall performance, 2014; 21st Century Carpet Sale! A legendary collection, performance and auction, Swedenborg House, London 2014, Animal with a language, waterside contemporary, London 2014 and Campagne-Premiere, Berlin, 2015. Ashery is the 2013-15 Visiting Professor at the Painting Department, Royal College of Art and a Fine Art fellow at Stanley Picker gallery where she is currently developing her web series project Revisiting Genesis for the internet.
www.ica.art