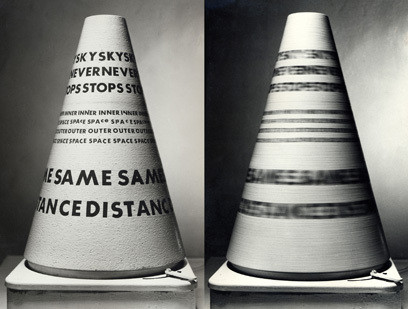 Poor. Old. Tired. Horse. is an exhibition that takes an imaginative and expansive look at text-based art practices from the 1960s to the present day. In particular the exhibition is inspired by the example of Concrete Poetry, a movement that flowered in the 60s but which is now largely forgotten. Concrete Poetry explored the graphic potential of language alongside its poetic and literary possibilities, and so too do the works in this exhibition, which includes works by figures who emerged in the 60s alongside those of younger, contemporary artists.
The Scottish artist and writer Ian Hamilton Finlay was - in one of his many incarnations - a leading proponent of Concrete Poetry in Britain, and the exhibition takes its title from a periodical that he ran from 1962 to 1968, and which featured graphic and literary experiments by Finlay alongside those of other artists and poets. Finlay, in one of his aphoristic assertions, maintained that 'stupidity reduces language to words', and it is the complex potential of the linguistic and the literary within art that is explored in this exhibition.