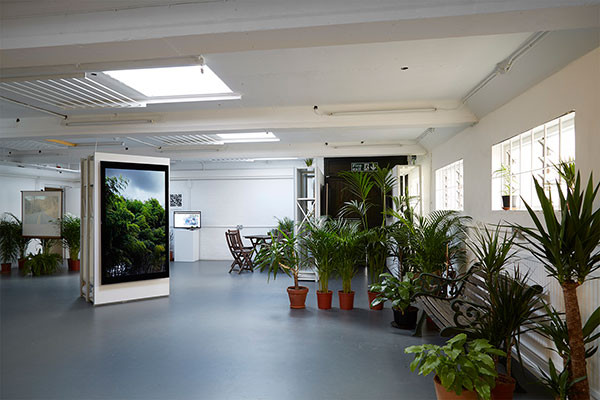 Online magazine POSTmatter is invited to produce an exhibition and a publication taking place in the physical premises at ICA Studio and on the digital platform activated by POSTmatter editor-in-chief Louise Benson. Through embracing the daily production of content on the dichotomy of nature and its digitalisation as artifice, and inviting a large set of contributors ranging from artists to writers, curators and theorists, Benson opens the ground for interrogation, evaluation and production. Evoking an aesthetic akin to Marcel Broodthaer’s seminal work ‘Jardin d’Hivers’ (1974), the exhibition set-up will be composed of artworks and pot plants that are placed in various configurations. The gesture of borrowing representations from a natural surrounding acts as a trigger to further the thematic investigation on environment and digital landscape. The setting for ideas include works by Emma Charles, Mark Dorf, John Gerrard, Jacob Kirkegaard and Clement Valla. Accumulating immediate and recently composed responses to the aforementioned theme, the week long project takes on a strong digital dimension. The project includes essays written within an hour limit by artists and writers, web-chats between contributing artists and selected writers and curators, artist contributions for the online publishing platform on the POSTmatter website and a live event at fig-2 that will generate a communal text composed by five writers, thinkers and curators on Thursday evening. Tickets will be available from Monday 20th of July at ICA website.

Emma Charles is a London based artist. She presents her photo series ‘The Straightest Path Allowed by Law’, an exploration into the relationship between trading routes and the phenomenon of the American landscape. In 2010, the Allegheny mountain region of Pennsylvania was drilled through to make way for a private fibre-optic cable line, constructed to speed up high-frequency trading times between New York and Chicago by a matter of milliseconds. Tracing this route along small paved roads, bridges and railroads, Charles examines what it represents as a topographic survey of economics, uncovering the invisible presence of financial markets in a seemingly vernacular landscape.

New York based artist Mark Dorf presents two video works from //_PATH, in which he examines western society’s interactions with the digital world and its relationship to our natural origins. He is interested in how we encounter, translate, and understand our surroundings through the filter of science, maths and technology. Combining digital photography, collage and 3D scanning to create geometric and synthetic forms within the landscape, he seeks to understand our habitation of the 21st century world through the juxtaposition of nature and the digital domain.

Dublin and Vienna based John Gerrard presents ‘Working Drawing for Infinite Freedom Exercise (near Abadan, Iran)’, a computer-generated version of a landscape found in southern Iran. A virtual camera circles a simulated figure standing in the road, dressed in non-nationalised army fatigues. The man performs a routine of gestures derived from contemporary military exercise, day and night – without ever leaving his post – for a full calendar year, during which the simulated sun, moon and stars traverse their actual paths in real-time. Created using 3D motion scanning, and in collaboration with choreographer Wayne McGregor, the performance is both repetitive and consistently developing.

Jacob Kirkegaard is a Berlin based artist and composer. He presents ‘Stigma’, which was recorded and filmed in four places in the natural landscape around the disabled nuclear power plant in Fukushima, Japan. The layered sound recording of each space reveals its resonant frequencies, exploring unheard sonic phenomena through digital tools. This composition is accompanied by layered video of the same space on a vertical screen, inspired by the Japanese hanging scrolls tradition with their evocations of nature and floating landscapes.

Clement Valla is based in New York. He presents an image from ‘Postcards from Google Earth’, in which he exposes moments found on Google Earth where the illusion of a seamless representation of the Earth’s surface seems to break down. While these occurrences have the appearance of glitches, they are in fact the absolute logical result of the system. They reveal Google Earth to be an automated database disguised as a photographic representation. These uncanny images focus attention on that process itself, and the network of algorithms, computers, storage systems, automated cameras, pilots, engineers, surveyors and map-makers that generate them.

About POSTMATTER
POSTmatter is a digital magazine that focuses on the intersection of art, science and technology. Through editorial, film, interactive interviews and art commissions, it explores interdisciplinary work from around the globe. Launched in 2010 as a series of independently published editions for the iPad, POSTmatter is now published exclusively online. With this medium in mind, it examines the wider implications of the digital shift within the physical world, looking at how each influences the other. Edited by Louise Benson and designed by Yann Binet, it proposes new ways of engaging via the screen.

Graduated from Cambridge University in 2012 with a B.A. in English. While there, she edited the student newspaper Varsity, which has been running since 1947. After graduating, she worked in print magazine publishing at Monocle, Vice and Tank magazine, before joining POSTmatter as deputy editor in November 2013. She took over as editor-in-chief in December 2014.
www.ica.art