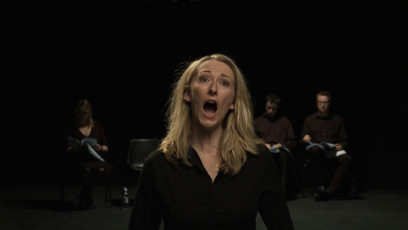 Artist Stella Capes uses a variety of media in her work, including video, performance and sculpture, generating situations that explore the vulnerability and pathos of human endeavour. She often scrutinises the relationship between performer and audience, and as part of a residency at the ICA during May's Talk Show season, Capes produced a new video work in an open production. The Recital: Voices from Five Films is now exhibited as a multichannel video installation.

The piece employs professional opera singers to reinterpret the screams of characters from five horror films. Scrutinising the formal qualities of each scream – the length, and fluctuation in pitch or tone – they arrive at a 'sung' adaptation. Shot as real-time takes running the length of the original films, the emphasis is on the 'live' performance of these isolated cries – the vocalists perform their 'translations' at the precise moment that the scream occurred in the original film. Through Capes' selection of moments of trauma that span cinematic history, this perverse act of translation conveys a social history of the horror movie, and of sources of fear.