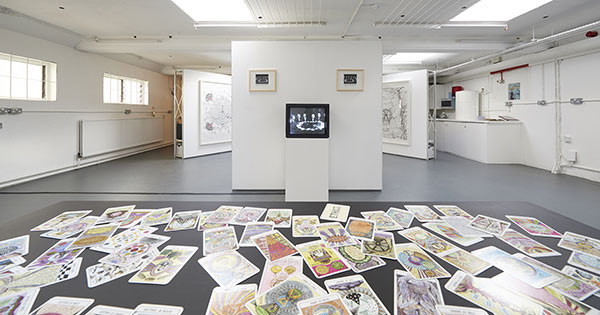 Suzanne Treister brings forth her investigations of traumatic histories of the 20th century in HEXEN 2.0, manifested as a series of drawings, deck of Tarot cards, a film and a book. The exhibition surfaces unverbalised parallels between modern technologies and their occult double, explored through diagrams of topological displacements and transformation of knowledge. In relation to the Macy Conferences held between 1946 and 1953, Treister retrospectively stirs the ideas of cybernetics with sensibilities of contemporary society into a kind of visual discussion. On April 8th, Mark Pilkington will activate the Tarot Deck by Treister, conducting a group Tarot Reading to reconfigure history, and the possible futures of humankind in terms of technology and society.

HEXEN 2.0 TAROT READING BY MARK PILKINGTON
During fig–2’s presentation of Suzanne Treister’s HEXEN 2.0 project, Mark Pilkington will conduct a group tarot reading using the HEXEN 2.0 deck.
The HEXEN 2.0 Tarot features 78 alchemical drawings depicting interconnected histories of the computer and the internet, cybernetics and the counterculture, science-fiction and scientific projections of the future, government and military research programmes, social engineering and ideas of the control society, alongside diverse philosophical, literary and political responses to advances in technology, including the claims of anarcho-primitivism, technogaianism, and transhumanism.
Through representing and re-examining these subjects and histories through the lens of occult belief systems and ideas of the supernatural, the HEXEN 2.0 Tarot takes us to a hypnotic, mesmerising space from where one may imagine and construct possible alternative futures.
Acknowledging precendents such as the traditional tarot deck, The Rider-Waite Tarot Deck and Aleister Crowley’s Thoth Tarot Deck, Suzanne Treister has here produced a new Tarot, that allows a reader, or a group of readers working collaboratively, to use the cards to reconfigure history and/or map out hypothetical future narratives.