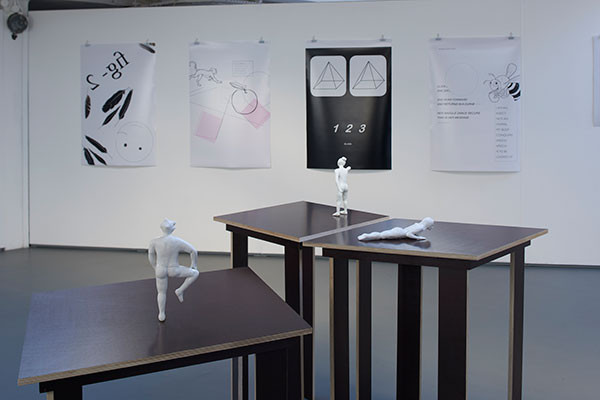 Veronika Hauer’s work embodies the medium of performance expressed and elaborated through writing, speech, sculpture, video and prints. Hauer’s exhibition at fig-2 gathers existing and newly produced works relating to performance without immediate physical activation. Produced in steady dialogue between the artist’s intention and audience’s perception of a piece of performance, the exhibition will feature the video pieces ‘Semaphore Dance’, 2014 which premiered at the recent Glasgow International, and ‘speech is to be looked at’, 2015, a series of poster works and Hauer’s ‘Cuckoo’ series. These works depict performance as subject matter, inviting the audience to engage with the imaginary. Additionally, online contemporary art magazine Nowiswere plays a significant part in Hauer’s artistic practice. For the first time in its seven-year history, the magazine’s first printed issue is being launched on the occasion of the exhibition. Activating the idea of live publishing, contributors Andreas Heller and Barbara Kapusta will unveil their contributions live for the audience. Please book your tickets for the launch here

fig-2 would like to thank bmukk, Austrian Cultural Forum and Forum Stadtpark Graz for their generous support.