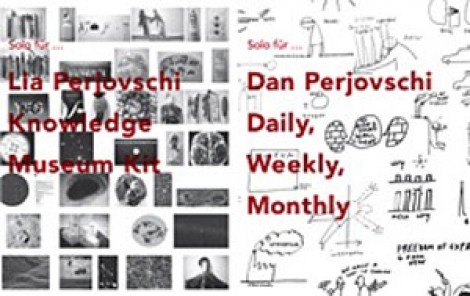 This series of exhibitions by the ifa Galleries Berlin and Stuttgart of the Institute for Foreign Cultural Relations is entitled "Solo for ...". These are solo exhibitions for artists who first exhibited in the ifa Galleries years ago, at the beginning of their international careers. Today, Gülsün Karamustafa and Ayşe Erkmen from Turkey, Dan and Lia Perjovschi from Rumania, Moshekwa Langa from South Africa or Liina Siib from Estonia – to name but a few – are active internationally: They live, work and teach – in most cases on a temporary basis – in New York and Amsterdam, in Vienna and Frankfurt a. M.. Their work can be seen at the documenta, at the Biennale in Venice, in São Paulo, Istanbul and Gwangju. Institutions like the Hamburger Bahnhof in Berlin or the Tate Modern in London invite them to stage large projects, extensive individual exhibitions and retrospectives.

The ifa Galleries Stuttgart and Berlin exhibited works by these artists back in the early 1990s – in several cases for the first time in Germany. In 2011, to celebrate 40 years of the ifa Gallery Stuttgart and the ifa Gallery Berlin’s 20th anniversary, we started the "Solo for ..." series. We invited Gülsün Karamustafa to create the installation "Etiquette" for the ifa Galleries Berlin and Stuttgart. These solo exhibitions demonstrate the quality and continuity of the contribution the ifa Galleries have made to the international art world. They also allow visitors to follow the development of individual artists, at least as a series of snapshots. These solos are also our way of thanking the artists who trusted us in the past and continue to trust us.